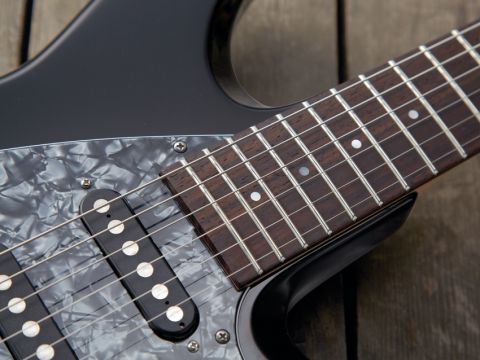 A modern take on the Stratocaster? Well, that's one way to look at this double-cut…

Taylor's SolidBody electrics made their debut back in 2007, and both Standard and Classic models are now available in a double-cut design.

But that's not all: a slew of Taylor-made pickups are also now available and you can design your very own guitar online using the SolidBody Configurator - one-stop online design shop that enables you to spec up a Taylor SolidBody as you see fit.

Using the same construction as its brethren the SB1-X, but with Taylor's spanking new double-cut shape, the SB2X's body is slightly trimmer across its lower bouts. Owing to the different upper strap button position, it also sits differently on the strap with better top-fret access thanks to the deeper treble cutaway. Here we selected the Taylor vibrato (like the famous Fender unit, it's erroneously called a Tremolo); it's a complex design using individual string saddle 'shuttles', within a two-pivot base-plate.

The arm push-fits (with tension adjustment) and finally you screw it in place. Like a typical Strat's vibrato we have three springs for tension. To accompany the vibrato we get locking tuners, the lock engaged with a large rear-placed knurled knob, plus a Tusq, not bone, nut with a noticeable up-turned break point.

This means the string is in contact with less of the nut material to reduce the chance of strings sticking and affecting accurate return to pitch. The aforementioned narrower bridge string spacing of 52mm is in line with most modern vibrato units.

On this model we selected a full-size HG open-coiled 'bucker at the bridge and two noiseless 'single-coils' (actually humbuckers) in the middle and neck positions. The five-way selector offers the following selections: neck; neck and middle; middle; middle and bridge, and bridge only.

Strummed acoustically the vibrato-equipped double-cut sounds more Strat-ish than the SB-1X we tested alongside it, with less smooth ring and a little more percussive attack. There's more edge to the tones too and added power from the HG 'bucker.

As supplied, the bass end was a little prominent on the 'single-coils' but they sound good with a balanced clarity compared to the rock grunt of the bridge humbucker, while the in-between sounds are both Fendery and funky.

The vibrato feels a little stiffer than our reference Strat's, and it will dump the strings down on to those large-diameter pole pieces resulting in a big clunk. Tuning took some serious string stretching and some lubrication at the nut, but we got there.

That aside, it's a highly versatile guitar, like any H/S/S Strat really. It feels, and sounds, a little more modern than its single-cut sibling perhaps, but that's an observation not a criticism and the humbucking 'single-coils' prove much more resilient to hum than our reference Strat.

This is a superbly purpose-built guitar, and although we did have some tuning issues with the vibrato we'll put that down to a one-off - our experience tells us Taylor doesn't make guitars that don't work 100 per cent. Do yourself a favour and try one on for size.