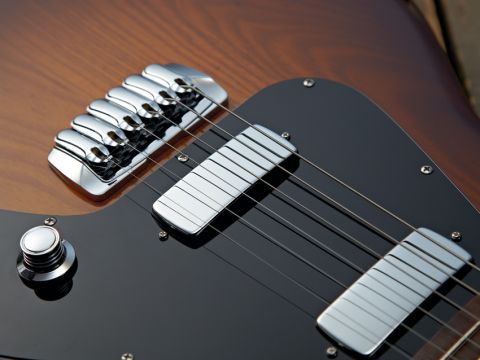 A modern solidbody design with numerous custom options and a welcome old-school tonality. It's time to take Taylor seriously as an electric guitar maker.

American acoustic giant Taylor kicked off its SolidBody electric program back in 2007 with
the semi-solid Custom and Standard models, plus the solid Classic - but plenty of changes have happened in the intervening years.

The Custom is no longer offered and both the Standard and Classic are now available in single- and double-cut designs. A slew of Taylor-made pickups are also now available and you can even design your very own guitar online using the SolidBody Configurator, a nifty online design shop via which you can fit out your guitar just as you'd like it.

The Classic looks and feels very purposeful, with a mainstream weight of 3.9kg/8.5lb. It's broader than a Les Paul across its lower bouts, with a typical 'bolt-on' depth of 46mm, though it feels thinner thanks to those SG-like forearm and cutaway chamfers. There's also a slight ribcage cut on the back.

Its two-piece swamp ash body is mated to a perfectly quartersawn maple neck via Taylor's finely machined, single-bolt T-Lock neck-to-body joint resulting in a super firm joint with minimal heel and not a gap in sight.

The camber of the dot-inlaid, 22-fret rosewood fingerboard has been decreased since the first SolidBodies, from 381mm (15 inches) to 305mm (12 inches) although Taylor designer David Hosler reckons, "When we measured it a while ago, and we're not quite sure why this happens, but it's more like a slightly compound 10-12-inch radius."

The back of the satin finish neck, with separate scarf-jointed three-a-side headstock (modelled on the R Taylor design) has a shallow but not over-thin 'C' section - 20.7mm at the first, 22mm at the 12th - while string spacing is 36mm at the nut and close to classic Fender at the bridge, 55.5mm, rather than the narrower Gibson/PRS bridge spacing on the double-cut's vibrato. Set-up and feel is good: a kind of a modern production Fender feel with a subtly flatter 'board camber and shorter 632mm (24.9-inch) scale length.

Taylor's bridge design is stylishly complex. Each string has its own saddle 'shuttle' and each string top-loads from the back; there's an intonation adjustment screw for each, which when set can be firmly locked.

The visible top plate of the bridge is locked in place by another plate underneath, effectively sandwiching a thin portion of the top of the body; you can see this by removing the backplate, plus the three grub screws that control height/tilt adjustment. Adjusting it takes a little getting used to, but once done and locked in place nothing moves - and the overall ring and resonance of the guitar is certainly impressive.

And although the pickup set-up seems simple enough, the pickups are also purpose-built for the range. These two HD mini-humbuckers in their chromed covers are controlled by a five-way lever switch that voices neck, both and bridge humbuckers (positions one, three and five) then the two inner coils in parallel (position two) and then in series (position four).

The wiring looks ultra tidy and quite
high-tech, and by removing the scratchplate screws and unclipping the output jack you can quickly install another pickup-loaded scratchplate.

The single-cut has a really nice ring to it, and combined with the relatively low output pickups we're greeted with a good balanced tonality that sits between the cut of a single-coil and the fuller thickness of a vintage-style humbucker. The 'high definition' (HD) description is perhaps a little overstated. Compared with this month's Telebration Telecaster Custom, for example, there's less brightness on the bridge pickup and a little less depth from the neck pickup.

But then we have three other sounds to investigate: the clean Fendery parallel mix of the two inner coils, a slightly fuller twin-pickup mix and perhaps, most interestingly, the two inner coils in series, which is a bit of a secret weapon tone, especially as we edge up the gain. There's jangle aplenty: as we said, not sharp-edged, but fuller and more bell-like.

There's a smoothness to the high-end that really suits higher gains and the tone control easily loses any high-end fizz. When turned 'off' (anti-clockwise) it really does sound like you've pulled a wah pedal back, and is less 'woofy', more mid-focused.

In short, Taylor has truly arrived in the electric guitar business and if you're after a relatively affordable modern design, this is a great place to start, not least for the design-it-yourself concept and the quick-swap pickup-loaded scratchplates.