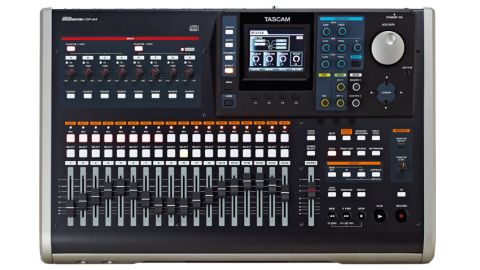 A self-contained 24-track recording studio that will take you from the first chord to a finished CD.

It's been a little while since we've seen a brand-new, large-format hardware multitracker, but if anyone was going to bring one out, it had to be Tascam, who practically invented the market over 30 years ago.

The DP-24 is the latest in a long line of Portastudios, and the company claims is its best yet. It's certainly the one with the highest track count in its current range, and is likely be welcomed with open arms by those recordists who prefer the hands-on hardware approach to messing around with a mouse and a software DAW.

The DP-24 records to removable media - either SD or SDHC cards - and is capable of playing back 24 tracks, arranged as 12 mono and six stereo. It can record up to eight tracks simultaneously through eight channels, each equipped with standard jack/XLR combi inputs, plus phantom power for condenser mics. The unit also has onboard effects for tracking, mixdown and mastering. Files can be transferred to computer via USB, while the multitracker sports a CD-RW burner for finished songs.

The first thing to note about the DP-24 is that it is nicely put together, with a metal top panel and a solid feel to all of the knobs and faders. The second thing - and this is new for a Tascam machine - is that it has a colour display, which, although small at around 60 by 70mm, is set at an ergonomic angle and can be clearly seen.

There are plenty of buttons, knobs and faders spread over the DP-24's surface, but they are neatly laid out for ease of use in areas delineated by function. The angled surface next to the display, for example, houses all of the knobs that control EQ, panning and effects for any channel or track.

One of the eight inputs is designated for guitar, with a switch to turn it to Hi-Z operation so you can plug straight in. There are also a bunch of amp and effects sounds that can be applied to the input and recorded. What you get is a signal chain with adjustable compressor and noise suppression, and just one amp with a choice of eight different cabinets and controls for gain, master, tone and reverb.

For effects, there's a choice of chorus, phaser, flanger, tremolo, auto wah or delay, plus a set of 10 factory presets you can instantly recall, alongside 10 memory slots for saving any sounds that you create. While the sounds are not up to the standard of the best dedicated hardware processors, they are all playable and offer a quick way to get a host of different guitar tones recorded. EQ and dynamic effects (compressor, noise suppressor, de-esser or exciter) are also available to apply to the inputs, so there's plenty of scope for tweaking any raw sound before you record it.

Setting up for recording is straightforward. If you are going to record all eight inputs at once, they are routed by default to tracks one to eight, but routing any input to any track is a matter of a couple of button pushes. Unlike rival machines, there are no drum patterns onboard, but there is a metronome, and you're able to import audio to a track from a CD, so could easily import some sampled patterns and loops. Once a track is armed, recording can commence with a single press of the record button, but there are the usual guitar-friendly, hands-free options of using a footswitch or setting up automatic punch in and out points of you desire.

There's scope for several attempts at a solo, and you don't have to use up loads of tracks to do it because there are another eight virtual tracks for each recording track, so you can store multiple takes and assign the best one to a playback track. A comprehensive set of editing tools allows you to do things such as cutting and pasting audio, or compiling a solo from the best sections of several takes. If you are running out of tracks, you can bounce several down to a new mono or stereo track to free up the originals for some more recording space.

For mixdown, there's an EQ available for each channel, plus a pair of send/return effects. The first send accesses an onboard processor that offers a choice of reverb, delay or chorus. Alternatively, that send can be routed to a rear panel output to access an external effects processor, with the output from the processor routed back through the input channels. The second send is for use with external effects only.

We'd like to have seen both sends access different internal effects, since having both reverb and delay/chorus would help create more sophisticated mixes, but there's a limit to the DSP power in a unit such as this, and there's nothing to stop you connecting up some guitar pedals to send two. Once the song is mixed down to a dedicated stereo master track, it can then have mastering effects applied to it for a final polish. Finished songs can be burned straight to CD or easily transferred to computer via a USB connection.

In a world where computer-based recording is the norm, Tascam is sticking to its hardware guns with the DP-24, and why not? While you could use it alongside a DAW, recording on the DP-24 and then transferring the files over for further work or mixing, the fact is that the DP-24 is a self- contained music-production workstation that will take you from a tentative song idea to a finished mastered album, without a mouse in sight. The only add-ons you'll need are instruments and mics, a set of headphones/monitors, a decent capacity SD card (the supplied 2GB card will get you started, but not much further) and a blank CD.

It can be a quick and efficient recording tool once you get the hang of it - which could take some time because the manual leaves a lot to be desired. Still, the DP-24 has plenty of options for the singer-songwriter building up arrangements. Bands, on the other hand, should see the potential of the eight-track simultaneous recording capability, which means that with enough microphones, you can take it down to the rehearsal room and record the whole shebang in full flight, or maybe just some decent-sounding drum tracks for further overdubs.

If you want to make some decent-quality recordings, need a lot of audio tracks to do it with and don't want to go down the computer route, the DP-24 could be just the thing - a tidy 24-track studio that you can keep in the cupboard and set up on the kitchen table.