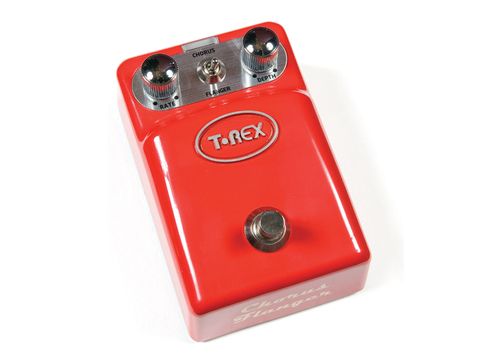 If you're buying with your ears, then this ToneBug's well worth the cash. But if tweaking your sounds, hands-free control and true bypass are your thing, give it some thought.

It's widely agreed that two is better than one - after all, it's one more. That's the kind of thinking that lead to T.Rex designing the Chorus + Flanger.

It's a single-size pedal with a streamlined control set (Rate and Depth) and two effects built in. The Chorus + Flanger can nail 80s clean rhythm sounds and lead thickeners a treat, but it can also sound modern and unusual too.

One factor in its versatility is that the Depth control means business. Keep it low for subtle flutters and ramp it up with a slow Rate setting for drunk-in-a-hall-of-mirrors-style modulation.

Back it off towards the middle and you can mimic a stretched-cassette tape lo-fi sound. The same applies to Flanger mode. Run it through some distortion with high Depth and low Rate settings, and you'll get the jet plane soaring sound that's graced a hundred metal breakdowns.

Play it with a dirty-clean sound with faster modulation and you'll be approaching Leslie speaker noises a la Black Hole Sun.

So it sounds great, but there's a catch. That simple control count limits your options a bit, and the biggest omission is a tap-tempo control to set modulation speeds. We could live with the basic control set on a cheaper pedal, but it feels skimpy here.