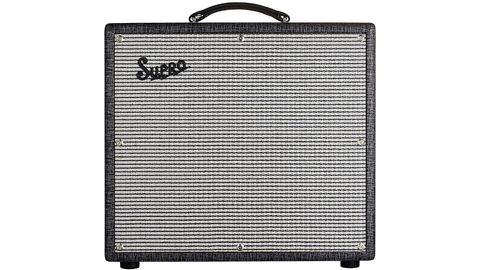 If Jimmy Page gets his hands on this new Black Magick, there's a chance the Rock And Roll Hall Of Fame will get to keep his original Supro a wee bit longer...

Assembled in Long Island, the Supro 1695T Black Magick is a recreation of the amplifier Jimmy Page used in the early days of Led Zeppelin.

While 'Black Magick' is an obvious reference to Page's infamous fondness (if that's the right word) for the dark arts of occultist Aleister Crowley, the name could just as easily nail the intrigue surrounding his early backline decisions.

Jimmy apparently owned a bunch of Valco-made Supro amps in the 60s, but the modified 1959 1690T Coronado that he loaned - yep, he wants it back - to the Rock And Roll Hall Of Fame in Cleveland is the likeliest candidate for the combo he used on the first Led Zeppelin album... and beyond.

"I was using the Supro amp for the first album and still do," said Jimmy in recent years. "The Stairway To Heaven solo was done when I pulled out the Telecaster, which I hadn't used for a long time, plugged it into the Supro, and away it went again."

The new 1695T Black Magick nails the cosmetics and circuitry of the original '59 Coronado. It's a handsome devil. We can't remember the last time an amp made us go "Oooh...!" when we hauled it from its box. The spec list is a thing of beauty, too.

Beyond that black-and-white rhino Tolex hide, you get two channels, one tone control, four 12AX7EH preamp tubes and a pair of 6973 bottles feeding the 25-watt Class A power amp.

The '59 Coronado came loaded with a pair of 10-inch speakers. Like Jimmy's amp, the Black Magick is spec'd with a single 12-inch speaker, in this case a Supro-branded 'British voiced' job. You'll also find a tube-driven tremolo circuit that can be engaged or otherwise with a footswitch (not supplied), again, just like Jimmy's...

We mentioned earlier that the 1695T has two channels. Well, it also boasts a pair of inputs - channels one and two with a parallel link and channel two solo. We'll wager it's the parallel link socket that will keep you most occupied. This arrangement, utilising both volume controls, provides the most gain, and it's here that you'll get closest to the distinctive breakup of Jimmy's early Led Zep tone.

Just like you can't put a Fruit Pastille in your mouth without chewing it, we defy anyone to not crank this amp and beat out the riff to Communication Breakdown. Okay, it's just about the first thing we did, but we should point out that the Black Magick isn't some one-trick pony.

Running clean, there is bags of clarity and sparkle for chord work - enough even to perhaps tempt someone like Johnny Marr away from his beloved Fenders - but dig in and you'll unlock the sweetest valve compression as the volume reaches the 12 o'clock point. This is a happy place for those of you who like playing clean blues licks... there must be one or two of you left. Rockabilly, country, and other rootsy folk will be chuffed, too.

Keep twisting those dials and you start to reveal the Supro's natural overdrive. Unless you use a fuzz pedal, or a treble booster, the 1695T will be loud at this point. It won't make you popular with the neighbours, but the sheer dynamic response on tap means you won't need friends.

Think of that bit in Dazed And Confused where Page switches from long sustained notes to that distorted ancestor of Black Sabbath's Paranoid riff. Just like Jimmy's Supro, this reboot reacts beautifully to the dynamics of your playing. You'll also fall in love with the sweet burble of the tremolo circuit that takes you from a faint wobble to classic CCR Born On The Bayou territory.

To paraphrase an old Rowntrees chocolate advert, we now know the secret of the Black Magick box. The 1695T is a time machine. It transports you back to an era when a session guitarist from Middlesex gave blues a good kick up the arse and invented hard rock and the concept of the guitar hero.

Crucially, he managed it with a Telecaster, a Tone Bender and a great little Supro tube amp, and he didn't need no new-fangled widgets like gain controls and 4x12 cabinets neither.