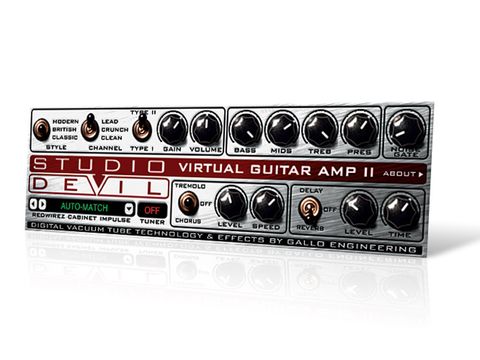 A considerable update to an already outstanding product, VGA II will delight pros and novices alike.

For anyone unfamiliar with Studio Devil's Virtual Guitar Amp (VGA), we can sum it up thus: a beautifully simple yet incredibly effective valve amp simulator at a ludicrously low price. Version one picked up a five star review from us a couple of years back.

Now VGA II has appeared. Like the original, amp selection is via a bunch of straightforward switches. Select a Style (Modern, British or Classic), a Channel (Lead, Crunch, Clean) and a Type (I or II).

In the original, the latter switch was labelled Boost, but as the manual points out, it doesn't just pile on extra gain but can bring in an extra tube stage, and in a few cases even changes the amp type entirely.

Thus there are effectively 18 'amps'. The manual reveals which real-world models they're based on - there's a Fender Twin, Marshall JTM45 and JCM800, Vox AC30, Mesa Boogie Dual Rectifier and more.

So, straight to the point: what does MkII have over its predecessor? Well, we were delighted to see the addition of tremolo, chorus, delay, and reverb, particularly given that one of our only criticisms of VGA I was its lack of effects.

Granted, in VGA II you only get tremolo or chorus combined with delay or reverb. However, each effect is incredibly lush, natural-sounding and effective, and a doddle to dial in.

Also new is the simplistic but perfectly effective tuner. Like everything else in VGA II, it's bang in view, right there on the front panel.

We applauded the tone and feel that the original VGA presented. This time around, things are even better: Studio Devil have upgraded the amp engine so that it uses the newer algorithms from VGA II's big brother, Amp Modeler Pro, aka AMP. And you can tell!

The modelled amps have a wonderful body and gutsy tonality, with a satisfying, organic feel. It really is a joy to rock out with them: they kick and react to your playing much like the real thing.

And this is all without needing to spend loads of time dialling in options - just plug in, and the great sound is immediately apparent. From jangling cleans to ballsy crunch tones, and from raucous rock on through to molten metal, VGA II can do it all.

While VGA II might not have the number of amps, effects and sundry bells and whistles as big-hitters like AmpliTube and Guitar Rig, its tone is right up there with the best of 'em.

There are enough amps/cabs here to cover the vast majority of bases - well, except basses, that is. As for the pared-down interface, we dare say that for the majority of guitar recording tasks, we prefer not having to pick from tens of pedals, amps, cabs and mics.

You can always use VGA II in conjunction with other effects plug-ins if you feel the need to snazz up the sound further.

VGA II is so much product for so little money, and it's wrapped up in a delightfully streamlined and intuitive interface. We have no hesitation in awarding it full marks once again.