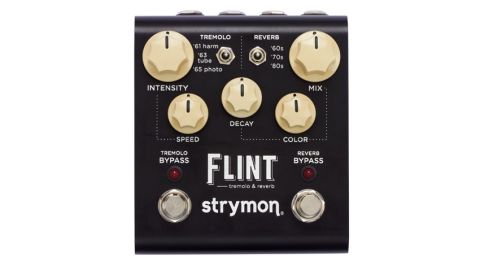 There's no better time to revisit the effects that started it all.

We often find ourselves in the privileged position of being in near-constant proximity to the most jaw-droppingly desirable new guitar equipment on the planet. Yet, there is a downside: believe it or not, it's actually possible to become desensitised to perfection.

Just as Scarlett Johansson's personal assistant might glance at his/her employer one morning and think, "My God, she's having a bad hair day," inexplicably, there are times when the latest figured-maple beauty queen fails to set pulses racing.

All right, so we jest - we're nowhere near as jaded as that might suggest, unless it's day four of a trade show - but it's true to say that it's a rare piece of gear that unites the whole office into one slavering mass of expectation. However, the Strymon Flint is one such pedal.

Since seeing the first teaser clips of the Flint in action earlier this year, our desire to get to grips with this pedal has amplified by the day.

Why the excitement? It may initially seem a little pricey and be loaded with sounds that are entirely digital in architecture, but the spirit of the Flint harks back to a pre-psychedelia, pre-fuzz box era when all the effects that most guitarists had at their disposal were the tremolo and spring reverb circuits built into their valve amplifiers.

It's misty-eyed nostalgia, perhaps, but to our ears there's still something kinetic, spine-tingling, subversive even, about the throb of an electric guitar seasoned with vintage-voiced 'verb and tremolo.

To all intents and purposes, the Flint is two stompboxes in one. On one side, you have a tremolo effect with three voices based on a trio of 1960s amp tremolo circuits: '61 Harmonic Tremolo, '63 Power Tube and '65 Photocell.

On the other side, you have a choice of 60s Spring Tank, 70s Electronic Plate and 80s Hall Rack reverb. '61 Harmonic Tremolo is probably the most noteworthy and least commonly heard of all the voices onboard, because it is based on the harmonic vibrato circuit that appeared briefly in 'brownface' Fender amplifiers of the early 1960s. Boutique stompbox makers such as Toadworks and Catalinbread have previously attempted to replicate it in single-function pedal format, but it's still an uncommon sound.

A pair of footswitches allow you to engage or disengage the Flint's reverb and tremolo circuits, while the exp jack facilitates connection of either a tap-tempo switch, an expression pedal - giving you hands-free control over the parameters of whichever knob you desire - or an optional Strymon 'Favorite switch' (£59.95). This allows you to store and recall one preset sound of your choice, bringing much more flexibility to your feet for stage use.

Alongside the self-explanatory functions of each control knob and the reverb- and tremolo-type toggle switches, the Flint has a series of secondary controls that are accessible by holding down both footswitches. Tremolo intensity becomes a boost/cut control that boosts or cuts the signal by +/- 3dB when the effect is engaged. Reverb mix also becomes a boost/cut that functions in the same way.

Still in secondary mode, speed controls the tap division when an external footswitch is connected, allowing you to set it up for 1/16, triplet, eighth or quarter as per your personal rhythmic requirements.

The most powerful function in secondary mode is accessed via the decay knob, which gives you control over the effect order. Conventional wisdom dictates that modulation effects should go before reverb, certainly in a stompbox effects chain. But in many vintage amplifier circuits, the signal was designed to travel through reverb first, then tremolo.

As you might imagine, this creates a much more dramatic tremolo sound because, rather than getting blurred by the wash of reverb that follows a picked note or chord, the tremolo chops up the reverberations, and creates a hypnotic pulse with almost delay-like characteristics at extreme settings. If you've never used reverb before tremolo on your pedalboard, you should try it - you are in for a treat.

Internally, the Flint is as sturdy and neat as you would expect from a stompbox at the premium end of the market, with its pots mounted on a separate PCB that sits above a main board where the SHARC DSP, input and output and mains adaptor sockets live.

Although it ships from the factory set to accept a standard mono input signal, if you want to plug a TRS stereo-input adaptor into the Flint, then all that is required is to reposition a small jumper as per the clear instructions in the manual. The whole shebang is housed in a strong but lightweight aluminium enclosure that should be able to take a serious booting onstage and live to tell the tale.

The Strymon blog goes into great detail about the vintage circuits that inspired the Flint's array of tremolo and reverb flavours, but it's important to emphasise that there's much more to this pedal than slavish recreations of retro guitar sounds.

Taking the sample settings suggested in the manual as a jumping off point, you can span several decades of killer guitar tone, from early surf through to Johnny Marr's How Soon Is Now? and the haunted baritone lines from Angelo Badalamenti's Twin Peaks theme. However, with creativity and invention, there's plenty of scope for crafting a sonic signature of your own.

While the Flint's high-quality '63 Power Tube and '65 Photo Cell tremolo sounds will be familiar reference points to most of you, the more leftfield '61 Harmonic Tremolo - more of a dual-band filter than a pure tremolo effect - is a really interesting voice, with psychedelic-smooth phase shifting that brings to mind a Leslie speaker or Uni-Vibe. In combination with the 80s studio reverb emulation and long decay settings, things can get pretty far out, especially with the effect order running reverb first.

Holding down the reverb bypass footswitch while powering up changes the Flint's bypass mode, which can be set to either analogue bypass (so your reverb trails hang over naturally after the pedal is disengaged) or true bypass. Neither is tonally 'better' per se, but it's nevertheless very useful to have both options, depending on what other gear/pedals/ amps you are using.

Meanwhile, in the safety of a studio environment, the Flint is simply an inspiration. Re-amping a dry guitar part through the pedal and playing around with reverb and tremolo combinations is an easy way to spend an hour or two with a big grin on your face. Even if the rest of your band are glancing nervously at their watches throughout, or perhaps preparing to swing a mic stand at your head.

It's fair to say that the Flint doesn't quite nail the vivid three-dimensional authority of a high-quality standalone analogue tremolo and a real spring reverb tank in a live performance setting - nor would we expect it to.

Yet in the real world, the convenience of having something that sounds close enough for rock 'n' roll in a small stompbox format wins out. Indeed, the Flint is so convenient that we wouldn't be surprised to find it becoming a Line 6 DL4-style pedalboard staple for pros and serious amateurs alike.