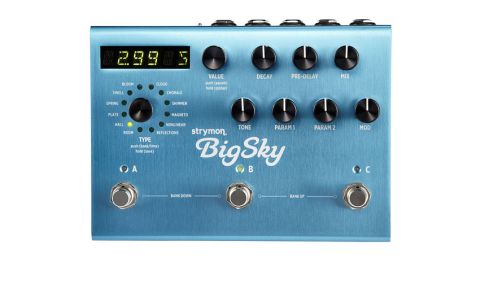 This kind of quality doesn't come cheap, but reverbs don't get much better than this - a superlative stompbox in every way.

Despite its relatively short existence, the name Strymon already commands plenty of kudos in pedal-loving circles. Thanks to sophisticated effects such as the El Capistan, TimeLine and Flint, the Californian company has become synonymous with unparalleled attention to detail and tonal integrity - and its latest creation, the BigSky, aims to be the pedal that is to reverb what the TimeLine is to feature-rich delay: a pro-quality stompbox that does it all.

Three footswitches give you instant access to three presets at a time - you can store up to 300 of them across 100 banks, which can then be edited on your computer using the Strymon Preset Librarian. Hitting the left and middle footswitches sends you down a bank, while middle and right sends you up; saving a preset simply requires a quick press and hold of the Type knob.

Those footswitches are for more than just switching sounds, though. Hold down the switch for the currently selected preset and you'll activate the Infinite Sustain or Freeze functions. Infinite Sustain causes the current reverb trail to decay indefinitely, adding each subsequent note you play to the reverb signal, while Freeze offers the same infinite sustain effect, but also allows you to play over the sustain without adding to the reverb.

You can choose which function is activated via the BigSky's easily navigated menus, which also give you the option to choose between buffered and true bypass, and spillover and Reverb Persist modes, which cause reverb trails to continue when switching patches and bypassing the pedal, respectively.

There's also an assignable +/- 3dB boost to ensure your reverb'd guitar signal doesn't get lost in the live mix, and even switchable cabinet emulation for playing direct and recording.

Considering the borderline academic nature of Strymon's research, you'd be disappointed if the BigSky sounded anything less than extraordinary. All that homework paid off: the 12 reverb machines are as natural or fantastical as you want.

In part, that's down to the flexibility of each machine - for example, the spring setting is utterly convincing, and allows you to nail the exact sound you love, right down to the number of springs themselves.

Much of the BigSky's appeal lies in its more atmospheric settings, and Strymon has amply provided for ambient and post-rock musicians. The pitch- shifted Shimmer setting is particularly impressive, offering two chromatically shiftable voices for painting ridiculously grand soundscapes. Then there's the Chorale setting, which applies a vowel filter to its 'verbs - it's almost like a vocal choir backing your every note.

As hefty as that price tag is, we can't help but fall in love with the BigSky. It makes us want to write poetry to the soundtrack of its glorious ambience - while it's so chock-full of features there isn't space to do more than mention its additional multi-head echo (Magneto) or studio-faithful Plate settings. But while the functionality is staggering, it's the sounds that make your jaw drop and your playing soar - and it's that which could end up justifying the lofty asking price.