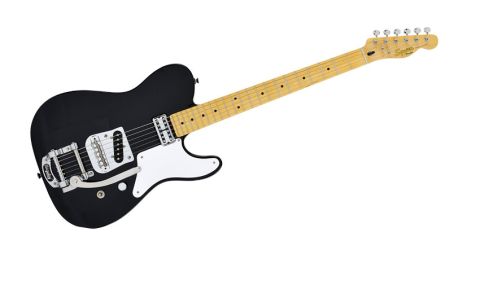 When Fender's Custom Shop La Cabronita Especial was launched in 2009, it's sheer drool-worthy desirability - combined with a wonderful simplicity that harked back to Leo Fender's earliest solidbody prototypes - resulted in almost immediate grassroots appeal. However, the Custom Shop models were limited in numbers and priced beyond the reach of all but household name players such as John Mayer and Keith Urban, and the most well- heeled of bedroom warriors.

While guitar forums in all corners of the web grew heavy with photographic evidence of players - even some luthiers - building their own Cabronita clones, 2011 at last saw a more affordable alternative spring up in the Fender catalogue as part of the company's 'Telebration' series of limited-edition 60th anniversary Telecasters.

The Fender USA Cabronita Telecaster was followed last year by Mexican-made models even more gentle on the wallet, but still very easy on both eye and ear. Now, here at the end of 2013, we find ourselves surrounded by Cabronitas in a variety of different orientations and denominations.

Superficially, the Squier and Fender-badged Cabs look very similar indeed. Unlike the Custom Shop models, there's no relic'ing, no TV Jones pickups and no S-1 switching. Instead, you get one of Fender's own Fideli'Tron pickups - no prizes for guessing from where their inspiration is drawn - and, erm, an extra fret.

All of the Custom Shop models to date have sported chunky 21-fret, 50s-inspired necks while the Fender USA, Mexican and Squier Cabronitas all feature more contemporary neck profiles with 22 frets, the 22nd sitting on an overhang in the modern Fender style. For some hardcore purists this is an unacceptable aberration; for other players, it provides extended scope for high-register soloing: you decide.

The Bigsby-equipped Squier has a noticeably skinny 'C-profile' neck with a depth of 19.3mm at the 2nd fret and 21.1mm at fret 12. It doesn't sound like much, but it makes a big impact in hand, especially when you throw the slim nut width of the Squier neck into the mix.

For this writer, there's no such thing as too thick when it comes to neck profiles and the definition of maximum comfort is a fat 50s baseball bat, but many will prefer the dimensions of the Bigsby-loaded Squier.

This Squier has both foam and springs in its Fideli'Tron rout. The optimum setup for Filter'Tron-style pickups from a tonal standpoint is achieved by raising them as close as possible to the strings without physically touching them when strummed hard, and foam rather than springs, is preferred on a flat-top solidbody.

It's an easy mod to add thicker foam if you need to raise the pickup height further than the guitar allows out of the box, but we found it straightforward enough to obtain a balance with which we were happy.

Apart from this model's standard single-coil bridge pickup, the bridge and neck pickups on all Mexican and Indonesian models are all the same Fideli'Tron units, regardless of the origins of the guitars themselves.

However, there are areas in which this Squier's lower price bracket translates palpably: scratchplates are a little rough around the edges, neck and body finishing isn't as refined and the wiring is lower quality than its pricier siblings. However, it's a guitar that's designed to be knocked about a bit rather than babied, and we'll forgive a little scruffiness at such a tempting price point.

Similarly, it offers a slightly rougher ride up and down the fretboard edges than you would find on a Fender iteration, but overall the standard of manufacture is high for a guitar with a street price that's less than £300.

It's pleasingly brash and resonant when strummed acoustically, given its licensed Bigsby B50-loaded vibrato, this Squier deserves special praise for its excellent tuning stability, courtesy in no small part to the Jazzmaster-style bridge, which rocks gently in conjunction with use of the vibrato arm and minimises friction. It's comfortably the best solution when mounting a Bigsby on a Telecaster body.

As we've said before in these pages, if you're new to Filter'Tron-style pickups, you're in for a treat. George Harrison, Malcolm Young, Billy Gibbons, Jack White: legendary sounds are here in spades and fans of raunchy rock 'n' roll will be in their element.

Fender's Fideli'Trons are a lighter, less throaty take on the Filter'Tron than either the TV Jones Power'Trons, TV Classics or indeed the units fitted to modern Japanese-made Gretsch instruments, but their sonic heritage is still abundantly clear. In many ways they're the EL84 valve of the guitar pickup world: midrange complexity and chime in abundance with a soft treble characteristic and more compression than a PAF- style 'bucker.

The combination of bridge single coil and vibrato make for a white knuckle ride. Raucous Neil Young-isms and bratty garage rock tones are a flick of the switch away from convincing Keef sounds in the middle setting and wonderfully woozy Richard Hawley-style tones in the neck position. These aren't the most sophisticated examples of these types of sounds we've encountered, but for the money, the sheer range is as exciting as it is inspirational.

Although the neck is a little thin for this writer's personal tastes, we're struggling to think of any other guitar with a sub-£300 street price that's been quite as compelling or seemed as damn-near essential in recent history.

It's not perfect, and if you're planning to subject it to life on the road, several parts would benefit from aftermarket upgrades, but at that price it's all part of the fun. If you like raunchy retro rock 'n' roll, it's a no-brainer and a worthy addition to your collection. You might even find yourself picking it up more often than some of your more expensive toys...