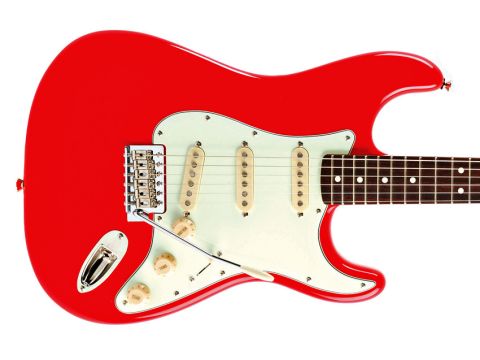 Want to look like Simon Neil? Get down the tattoo parlour. Want to sound like him? Hit the Squier dealer.

Topless, tatted and wild-eyed, Biffy Clyro's Simon Neil is very much from the 'escaped lunatic' school of stagecraft, so it's odd to see the ultimate symbol of electric guitar conservatism around his neck.

"Ah, but nobody makes a Strat sound as heavy as I make it," countered Simon in one TG interview, and now he's giving us the chance to try. Not with his US Fender Custom Shop Time Machine '60s model, mind you (circa £2,000 for that, captain), but with a £359 Squier that apparently plays so sweetly it even sees action at Biffy shows.

In the following video, Simon and James from Biffy, along with Neil Whitcher from Fender Europe, tell all about the new Squier signature models:

Some signature models shred the rulebook. Not this one. Alder body, maple neck, rosewood 'board, 21 frets… It's very much a red Squier Strat; the only visual cues are vintage hardware and a Biffy logo.

All hopes of mould-breaking rest on the pickups: a trio of custom single-coils whose fusion of Alnico III and V magnets should have a subtle impact on tone. Boring? To look at, maybe, but this is the format Simon plays. What else can Squier do?

In fact, what Squier has done is get this Strat as close to the US Fender blueprint as the bean-counters will allow. To play, the body is identical (though inevitably lower cost), while the neck is comparable, adding up to a faithful physical rendition of the most comfortable design on the planet.

You can understand why Simon is happy to pound on this thing live - it feels tough and professional, tunes up well and doesn't feel like a £359 axe.

On balance, you have to respect Squier for saving its firepower for the most important aspect of the guitar. The difference between standard Squier single-coils and these custom items is not, to be frank, night and day; they snap, pop and slice in that 'good-but-not-as-good-as-Fender' way we've come to expect.

With that said, to keen ears, there is increased tonal depth here (particularly on Simon's preferred bridge setting) that's critical for the 'huge' sound of single Mountains, and will give your own riffs a boost even if you hate Biffy.

And no, of course it's not as sweet as a 'real' Fender - the cheaper timbers and electronics make sure of that - but it's easily good enough to take out on the town.

Squier considered basing Simon's signature model on the stripped-down model he played in the early years, and while that would certainly have been quirkier, it would ultimately have been a mistake.

Pound-for-pound, this is the guitar that gets you closest to the sound of Only Revolutions, as well as equipping you for the first rungs of the live ladder - and that's surely more important than any number of 'artist-designed' fret inlays (even if it does cost £100 more than a standard Squier Strat).