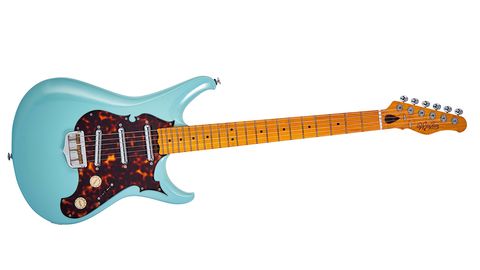 If you're in the market for something unique in looks and construction, and require a set of superbly original single-coil tones, Scott Walker's Electro has to be a contender.

Since Fenderpopularised the concept way back in 1954, manufacturers have addressed the three-single-coil format from a host of different angles.

But while some offer direct copies and others a timely tweak, California craftsman Scott Walker thinks rather more radically.

While serving for many years alongside Richard Hoover at Santa Cruz Guitars, Walker absorbed every facet of guitar design and reckons he's hand-carved over 1,000 necks - which he still does to this day on his own instruments.

A quick look at the Electro puts us in mind of the Paul Bigsby guitar that's said to have inspired Leo Fender, with its exaggerated but elegant outline, and almost gothic scratchplate. However, the Electro is much more than a tweak of the mothership's specifications, more a wholesale rethinking of the idea.

At the heart of the matter is his desire to elicit maximum "excitement" from the guitar's vibrating body, and this includes what Scott calls his "nodal" neck joint, and a machined aluminium bridge that's sunk deeply into the body and attached from the rear by two large bolts.

Using a beautifully sculpted four-bolt heel, the maple neck extends into the body right up to the bridge for maximum neck-to-body contact.

Instead of the usual Fender-style pickups, Walker winds his own lipstick types for the Electro. They certainly add to the visual feast and should provide an interesting voice, too. The Electro's secret weapon is a deceptively simple but extremely clever switching system. Using a three-way selector and just two knobs, it is in fact as versatile a guitar as we've seen.

Initially, the three-way offers Telecaster- style switching, with neck, bridge or both pickups on together - which a regular Strat doesn't provide, but which many players love. However, the furthest pot brings the middle unit into the mix for all those spanky tones we expect; it also means you can have all three pickups together.

Both pots are push-push. The knob nearest the pickups operates a buffer, designed to maximise clarity should you use long cables or a string of pedals; the second provides a boost for extra push and definition, whether used clean or with a driven amp or distortion pedal.

On the bigger side of average and with an action that some might find a little robust, the neck is nevertheless a comfortable handful. Its 22 medium frets and 254mm (10-inch) fingerboard make for a 'Gibson meets modern Fender' feel, and that's absolutely fine in our book. A deep and elegant cutaway means access to the 22nd fret is completely unhindered.

Sonically, the lipstick tubes are a revelation. Clearly single coil in nature, there's something beautifully 'in your face' about them. The opposing pickups ring clear as a bell, but there's a fatness in both that's very un-Fender-y.

It's a strident tone that's maybe even a little Gretsch-like - both pickups on is particularly twangsome. Of course, blend in the middle pickup and all those vowelly sounds come to life, and here, the Electro does get rather more Strat-like. It's nice being able to balance exactly how much honk you require, too. Adding the middle pickup to the 'both on' position brings a subtle but noticeable tonal shift.

The push-push buffer pot provides a slight lift to the overall presence, while the boost control on the other knob adds a significant kick to proceedings. Overall, the tonal palette is staggeringly versatile for something that looks so simple.

Given that Scott Walker builds a limited number of instruments each year, and that each is meticulously handcrafted, we don't feel that his pricing - between Fender's regular Custom Shop and Masterbuilt - is off the scale.

There's so much to commend the Electro. We especially like Scott's unique machined hardware, classy plastics and the elegant way he's taken a familiar format and made it his own.