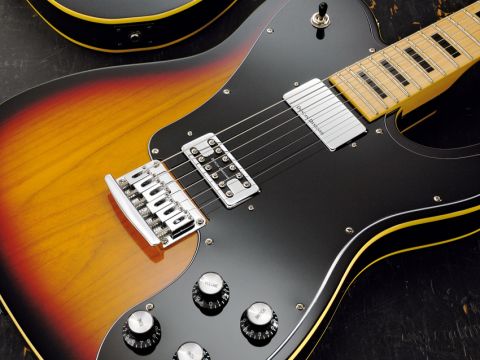 A good-quality guitar, but it could be eclipsed by the original - well worth trying, though.

Experimentation was the name of the game in the '70s, and we're not just talking hairstyles and naughty substances - the era saw an explosion in tonal tweaking and guitar modification.

In 1979, one of these assembled guitars found its way into the hands of Pete Townshend of The Who. Pete was in the process of retiring his 'numbered' Gibson Les Paul Deluxe guitars when his tech Alan Rogan found a Schecter in Manny's Music in New York.

Pete fell in love with the guitar and subsequently had UK luthier Roger Giffin, and later Schecter, build him more examples featuring his favoured set-up of a Fender Tele-style body loaded with a pair of high-output humbuckers.

Pete played his Schecter guitars onstage with The Who from 1979 to 1988.

While originally offered to the public as the Saturn model, the traditionally styled production version of the Townshend-esque Schecter is now known as the PT Fastback, and it obviously pays tribute to the '70 twin-humbucker Fender Telecaster Deluxe.

Schecter has selected a pair of (Seymour) Duncan Designed humbuckers for the Fastback's engine bay. The fact that the FG-101 bridge 'bucker looks a bit like a Gretsch Filter'Tron has us, not unreasonably, excited to hear some old school twang in that position. We'll soon see about that.

The front HB-102 humbucker is based on Seymour's über- popular SH-4 JB model. Now, the JB is traditionally located at the bridge position, which makes its role as the Fastback's neck pickup an intriguing prospect.

Interestingly, Pete Dee of English punk band The Adicts has a signature version of the PT, which features the same Duncan Designed humbuckers as the PT Fastback, only with the pickup positions reversed.

On the face of it, it would seem to make perfect sense to have the JB-style pickup at the bridge, but let's reserve judgement until we've tried the Fastback through an amp.

Before we get down to the serious business of rocking out, we should clear something up. According to itsspec list, the PT Fastback comes fitted with coil-taps, activated by pulling on the tone knobs.

In fact, both guitars are equipped with coil-splitters, not taps. Like the whole 'vibrato/ tremolo' can of worms, this is a classic misnomer perpetuated over the years by many guitar manufacturers and players alike.

It's not a big deal but it does merit an explanation. Most often used on single-coil units, a coil-tap bypasses a portion of a pickup's windings to reduce output.

A coil-splitter completely shuts down one of the coils in a humbucker to produce a true single-coil sound. So, there's a big difference between the terms.

A judicious tap with a screwdriver, and a quick call to the helpful folk at Schecter's UK distributor, confirms that what we're dealing with here are coil-splitters. Glad we got that sorted out.

The PT Fastback is close in spirit to the guitar that inspired it. The bridge humbucker pumps out a tone that's more reminiscent of an old Gretsch solidbody than a real Telecaster, but activating the coil-split gets you closer to the real deal.

The JB-inspired neck pickup works well in its slightly unorthodox position. While, like many neck humbuckers, it all goes a bit muddy when you add some overdrive, this JB substitute is the absolute business for upper fret noodling.

All in all, we reckon that the PT Fastback is a good solid package, but while we enjoyed our time with it, it doesn't offer much that you can't get from other guitars at a similar price point.

Obviously this guitar is competing with the Fender Classic Series '72 Telecaster Deluxe. Okay, that guitar is a little more expensive, but there's not that much in it. The PT Fastback could find it hard to beat.