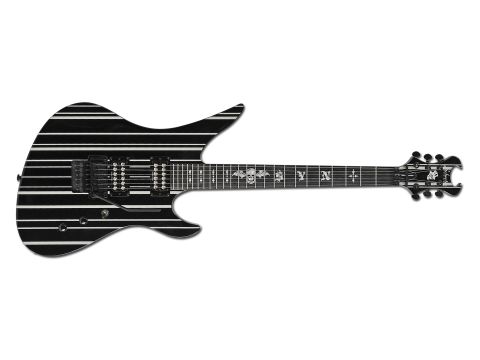 Given that Synyster Gates of Avenged Sevenfold can generally be found rocking black eyeliner and a leather fedora, it stands to reason that his bespoke Schecter is dark, seedy and not unlike a goth zebra.

There's no doubt the Synyster Custom is one of the hottest releases of 2008 - but will your salary have to increase sevenfold to bag one?

Since we're not paying, TG is testing the £979 Custom (touted as "the version we play, in that it has the pickups and every other thing our guitars have") as opposed to the devilishly priced £666 Standard ("a more affordable version for beginners").

While both have the pinstripes and Death Bat inlay, on paper it's worth the stretch, with this all-mahogany bruiser pulling ahead with a set three-piece neck, an original Floyd and the Seymour Duncan Invaders that Syn describes as "screaming".

Lift the Custom off the shelf and it doesn't feel like a textbook 'shred' axe. It's not particularly ergonomic and quite heavy too, plus the neck has a slight tendency to pull towards the ground when strapped on. But such niggles don't spoil a strong physical showing.

Syn is a technician, and his trademark drop D chord stabs, sweeps and brutal alternate picking are all feasible on this neck, while the heel and cutaway open up the top end of the fretboard nicely. An 'original' Floyd Rose isn't just psychological; this one feels super-responsive.

A7X's sound is modern Mesa-style distortion, and if you set your amp to suit, you'll find the Custom delivers the goods.

It's payback time for all that mahogany, which translates into dark, stinging sustain and means this axe cleans up better than most widdlesticks.

That said, the Invader is the angriest pickup in the Seymour Duncan line and it'd be a crime to keep it on the leash.

Crank the gain halfway and you're in Zep territory; keep going and you're in Bat Country, with these units fusing vicious brick-wall sonic muscle with razorblade clarity, and meaning you may never use the coil tap.

Sure, you could save cash and settle for the Standard. But why would you do a thing like that?