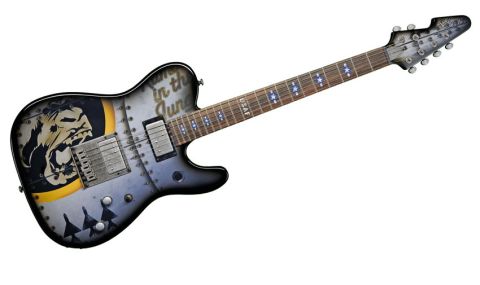 Clearly a derivative design, but the F-4 Phantom offers a solid slab of tonal armoury, and is one seriously versatile guitar.

Schecter's US Air Force-inspired guitars first popped up on the radar back in 2004 with the launch of the Aviation Collection. Resplendent in graphics inspired by the nose-cone art of legendary fighters and bombers of World War II, the guitars were intended as a "playing tribute to the brave men and women past, present and future in our armed forces". The latest addition to this squadron of highly decorated special-edition guitars is the PT F-4 Phantom.

As you can see from the specially commissioned reconnaissance photographs that illustrate this dossier, the PT F-4 Phantom is wrapped in a graphic of an angry simian baring its choppers. The Top Gun vibe is enhanced by the presence of 'Stars & Bars' and 'USAF' fingerboard inlays.

Given the topsy turvy political stuff going on in the Middle East and the world in general these days, some of you may not want a guitar covered in military insignia, not to mention bombs and rivets. That's up to you, but hear this, you 'orrible shower: there's much more to these guitars than some cool graphics. Let's lock on and engage...

The 'PT' part of the F-4 Phantom's designation ties it in with an important model in the Schecter catalogue. The current Diamond Series PT model is the modern-production version of the guitars Schecter built (with the assistance of Brit expat instrument maker Roger Giffin) for Pete Townshend.

The British legend played T-style Schecters loaded with twin humbuckers for much of the 1980s. It's that body style and pickup formation that makes up the business end of the F-4 Phantom's fuselage. While the regular PT has an alder body, the F-4 is routed from mahogany. The slim C profile bolt-on maple neck carries 22 beautifully dressed jumbo frets on a 356mm (14-inch) fingerboard radius - that's way flatter than a classic Strat or Les Paul... and the same as a Danelectro.

At the pointy end of the 648mm (25.5-inch) 'Fender' scale length lies an 'Ultra 4+2' headstock that's a notable departure from the subtle six-in-line profile of the existing PT. Call it guitar geek trivia if you will, but the F-4's head consciously, or more likely subconsciously, echoes the too-cool headstock design of the Japanese pawn shop prize Teisco Del Rey guitars of the mid 60s. Now you know.

Moving on, the Phantom's firepower is provided by two Schecter Diamond SuperRock Custom Alnico humbuckers. Now, these are easily among the most well-regarded Schecter components, with power and tone in equal measure.

The pups, nestling under covers of the same distressed chrome finish as the six-saddle PT-H hardtail bridge, are wired to a master volume, master tone and a three-way pickup selector toggle switch. The master tone control also features a pull/ push switch to engage the coil- split function for both pickups.

The tonal payload of the PT F-4 Phantom makes it more of an all-rounder than its looks suggest. The combination of the powerful SuperRock humbuckers and that mahogany chassis gives the guitar a real SG-style presence with bags of sustain. But there's more going on than that.

Figure in that extra dimension provided by the snappy classic Fender scale - and the coil-split function - and you'll find that clean and lightly overdriven bottom-string riffs and pedal steel licks really pop, making this guitar a great choice for country chicken pickers.

We've been advocates for the SuperRocks for a while now, and we're glad to see how well they give an account of themselves on both the existing PT and this brilliant derivative.

The PT F-4 Phantom is a bit of all-terrain vehicle. The combination of its mahogany body and powerful yet warm- sounding humbuckers feels very Vietnam-era classic-rock soundtrack. As we said, thanks to the coil-split function, it's also a damn good country and blues guitar... even if its looks might raise a few eyebrows on jam night down at the Hand & Racquet.

Whether you're feeling the 'plane' artwork on its fuselage or not, no amount of camouflage can hide the fact that when it comes to killer playability, a devastating tonal payload and, yep, good old-fashioned bang for your buck, the PT F-4 Phantom scores a volley of direct hits.