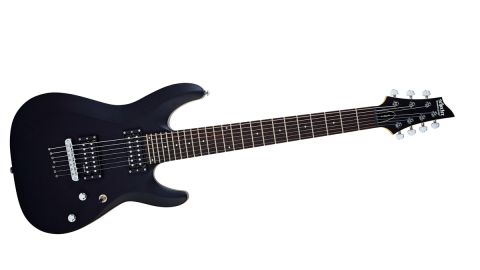 The C-7 Deluxe is a rock solid budget seven string.

In terms of tones, looks and playability, the C-7 Deluxe has much in common with the C-6, with a largely identical spec applied to a seven-string's proportions.

While the extended-range guitar is no longer a boutique curio, it still feels like a specialist instrument. But while the most guitarists will be happy to occupy the midrange frequencies, more of us are changing our styles to utilise the potential of seven-string guitars.

What's really exciting about the C-7 Deluxe is that Schecter has joined other shred-focused brands in making extended-range guitars much more affordable - a move that can only encourage more guitarists to explore seven and eight-strings.

The C-7 Deluxe should be measured against the likes of a Jackson JS32-7 Dinky DKA, which for a similar price offers a basswood body topped with a quilted maple veneer as opposed to the C-7's stripped-back minimalism.

Both are more than fit for purpose, and that bright, responsive power of the Schecter Diamond Series Plus humbuckers translates well to a seven- string instrument; in the normal first to sixth strings, the C-7 Deluxe sounds eerily like the C-6.

The C-7 Deluxe's neck features a neater heel, more than compensating the hand for navigating that big ol' fretboard.

There's always a worry that the seventh string might be a little flabby and ill-defined, but the C-7's, while a little buzzy, feels tight and stable, and its pickups have just enough throat to articulate the sort of low-end power you'd demand from a seven- string electric.