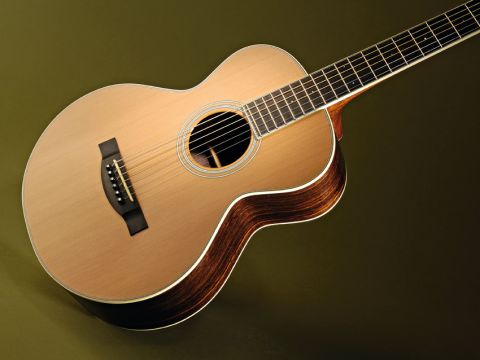 If you've got the funds, a mini acoustic is never likely to be more rewarding an investment.

More often than not, mini acoustics are associated with a level of affordability where you don't mind slinging them across your shoulder or in the back of the car for a bit of mobile minstrelling.

If they take a few dings, so what? In contrast, Santa Cruz's new little Firefly, with a price tag not too far shy of three grand, is a guitar you definitely won't be wanting to chuck around carelessly.

Acknowledging this, Santa Cruz includes not a humble gig bag but a hard case, which does rather compromise lightweight portability but maximises protection of your investment.

Broadly speaking, the Firefly is not dissimilar to Collings' Baby-2H. For instance, they share the same 609mm (24-inch) scale length and 14-frets-to-the-body format.

However, where the Collings is styled like a scaled-down folk, the Santa Cruz more resembles a super-diminutive mini-jumbo.

It has rounded, quite pronounced lower bouts and a span of 328mm (just under 13-inches).

To help compensate sound-wise for the small body, the rims are a relatively deep: 102mm down by the endblock.

Partnering its cedar front with rosewood back and sides, the Firefly is beautifully decked-out in Santa Cruz's usual tasteful and precision-honed manner.

The ivoroid-bound body carries inner multi-ply purflings front and back - the latter including a broad wood-mosaic centre strip.

A similar style of binding is used to edge the 21-fret ebony fingerboard and ebony-overlaid headstock.

The weight of the set of mini Gotohs combined with the 14th-fret neck join does make the guitar a tad neck-heavy, but not enough to be an annoyance once you're playing.

Aside from immaculate external finishing in high-gloss nitro-cellulose, the Firefly's internals are super tidy, with the most cleanly fashioned strutting and linings around.

On some mini acoustics, playability can be compromised by ultra-short scale lengths and more slimmed down than usual necks.

But the Firefly manages to offer a pretty much grown-up configuration. Span across the nut is a regular 43mm, while string spacing at the bridge is only a shade tighter than the regulation 55mm.

This means that, within a highly compact format, you effectively have the accessibility of a full-size instrument, whether in terms of high-position reach or fingerstyle-compatible stringing.

The neck itself, fashioned from one-piece mahogany, is profiled to a quite shallow, flattish-backed 'C' section.

This provides a very comfortable grip in conjunction with our sample's low-ish, speedy action.

The fretting is faultlessly fitted and dressed and minor details like polishing up the bone nut and saddle aren't overlooked either.

If ever there was a glowing example of a guitar that extracts a quart out of a pint pot, then this is it. The performance is frankly stunning for its size.

It's loud (easily matching some full-size folks), dynamics are supple, exuberant and sustainful, while the cedar front infuses the sound with more underlying warmth than would be the case with spruce.

The tone, otherwise, is quite bright and there's a parlour-like hint of breathy boxiness in the mids.

But the overall sound is far from the brashness often associated with mini acoustics, instead offering an impressive, mature delivery given its diminutive stature.

'Cute' is most people's reaction when they first clap eyes on the Firefly. Yes, it's an endearing thing to behold, but get to play it and it brooks no condescension.

This guitar will hold its own against the much bigger boys and it does so with panache, redefining what mini acoustics can be capable of.

The only caveat is whether you can stump up the ante to sample its quite considerable delights.