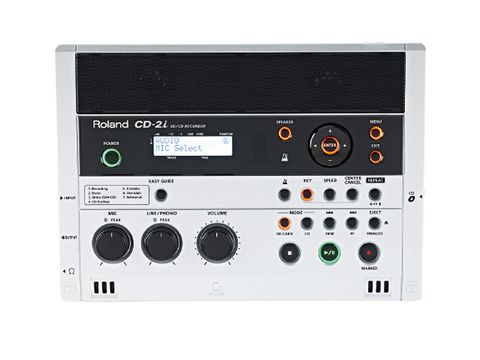 A very useful asset to have around - if only it was more affordable...

We've been seeing a lot of pocket-sized stereo recorders lately, and very useful they are too for capturing rehearsal ideas.

But operation of such small units can be fiddly, the playback from an internal speaker (if it has one) is often barely audible and can't be edited without a computer. So how about a larger, easily operable unit that provides playback people in the room can hear and an instant hard copy?

That's what the new Roland CD-2i can do - it's a tabletop stereo recorder with inbuilt stereo mics and speakers, plus a CD burner. Roland says that the CD-2i is designed to make recording and CD production easier than ever - you simply point, record, play and burn.

Everything is clearly laid-out on the front panel with dedicated buttons for most functions and a small but crystal-clear LED display. You can record using the onboard mics or any mic or line sources plugged into the sockets conveniently located down the left hand side-panel.

The input levels are set using large, easily grabbed knobs, with the output volume (from the speakers or the headphone out) taken care of with an equally large knob.

Audio is recorded to an SD card and can later be burned to CD, but if you're using mains power rather than batteries, you can record directly to a CD.

The CD-2i isn't designed specifically for guitarists, so it's no surprise that it has no dedicated Hi-Z instrument input.

What is a little surprising is that there's only one XLR mic input with phantom power - disappointing for anyone who owns a pair of condensers. But there are two 6.4mm jack mic inputs, so anyone who wanted to use something in place of the onboard mics for stereo recording would have options.

As far as operation goes the CD-2i couldn't be easier. Roland has included an 'easy guide' button that scrolls through seven basic functions (record, erase, SD to CD write, CD backup, karaoke, overdub and rehearsal). This leads you step-by-step through each operation, so it's difficult to go wrong.

While the display clearly shows the input level so that you can set it manually, in rehearsal the input level can also be set automatically by the machine 'listening' to a run-through of the song. There's also a limiter that you can turn on in order to prevent overload.

Recorded sound is really good, the onboard mics doing a decent job of capturing whatever's in front of them, while the onboard speakers offer clear playback at a reasonable volume.

Burning a CD is straightforward enough, and although there's no USB connection you can always transfer audio to your computer by copying the files directly from CD or using a card reader.

No problems with recording, then, and there's also a bonus in the form of onboard practice and phrase-training features, including a metronome, on-the-fly selection and repeat of sections of audio for repeated listening, pitch and speed change and centre-cancelling.

This allows you to make decent stereo recordings without wrestling with a tiny control surface or needing a computer. You can keep it at home, take it to band rehearsals, record the lot with instant playback and give everyone a CD to take home.

The same could go for gigs, too. You record the show, perhaps operating the CD-2i from the stage with its included remote control, and sell a few CDs of it instantly to all the happy punters - a potential money-spinner that could see you paying off the cost of the CD-2i in a matter of weeks if you do enough well-subscribed gigs.

With practice facilities as well, the CD-2i is a fine utility to have at hand.