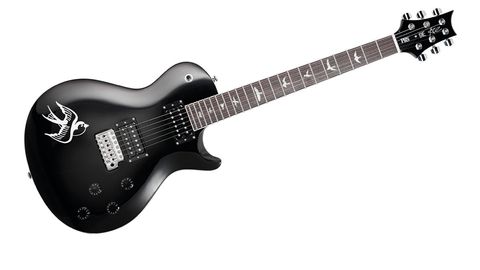 On this evidence, you can trust in Ace. We always said he was a class act: so is his guitar.

Ace of Skunk Anansie has been playing PRS for the past 15 years, so he's a perfect candidate for a signature guitar, which has just been released as a Europe-only SE model, limited to 180 instruments.

The Korean- made SE line is where most PRS signatures appear, and Ace's model is closest to the current Tremonti Custom (he calls his USA Tremonti, retro-fitted with 57/08 'buckers, his "ultimate guitar for touring and playing") and has the same vibrato and SE 245 'buckers.

While the Tremonti Custom has a solid maple top with a flame-maple veneer facing, Ace's model, in its opaque black-only finish, doesn't need that decorative veneer. We get single-line white body binding, mirrored on the fingerboard edges.

The nickel hardware plating adds to the classic biker vibe, and there's a white swallow sticker to add to the body. Along with the old-style pearloid bird inlays, it gives the Ace a very avian aesthetic.

Snobs out there will tell you Korean-made SEs, or the USA- made S2s, aren't real PRS guitars compared with the high-ticket 'core' USA models. Well, they're wrong.

Yes, the parts are PRS-designed and made in Korea, but the original design, for example, of the vibrato, means that it functions perfectly: likewise, the pickups, which are close cousins of the USA models.

Then there's the perfectly fretted fingerboard with slightly lower medium-gauge frets than you'll find on the USA models, a good weight (3.87kg/8.5lb) from the full depth body, perfect intonation and lively resonant ring... and that's before we plug in.

Control-wise, it's a classic drive - shoulder-placed three-way toggle, volume and tone for each of the humbuckers, and proper metal 'football'-shaped plate to hold the output jack. The action is dangerously low and super-fast.

If you hit hard you'll need to raise it a bit, but the combination of that and the slinky but not stupidly thin-depthed neck means either thumb-around or thumb-behind left-hand positions are equally comfortable.

Sonically, the classic hot SE 245 humbucker mixes well with the vibrato's edge for juicy classic rock-style voices; there are plenty of crisp highs that you can tame with either volume or tone control reduction, while heaping on the gain there's still clarity.

There's good pickup balance, and they're wired so turning one volume off doesn't mute the output, making for easy kill-switch techniques. Once the strings are stretched and settled in, the vibrato has a two-tone up bend on the G and goes down to floppy, but still comes back in tune.