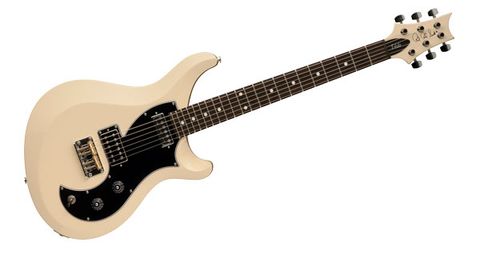 This is the finest S2 to date... and a PRS guitar that certainly isn't for doctors and dentists!

To many of us, PRS guitars just ain't cool. Why? Well, it's not that they don't attract a huge roster of artists and users, it's just that with those fancy looking maple tops and shell adorned fingerboards, they are, well, not always as rock 'n' roll as we'd like.

The trouble is, from the SE range upwards, they are very good guitars, known for their high build quality, perfect intonation, tuning stability and classy tones. Believe it or not, there are plenty of people within PRS who think the same, and it's those guys and gals who fought to create the S2 range, which launched in 2013.

Guitars such as the S2 Mira and Starla may have appeared previously in the high-line USA 'core' range, but S2 models are almost becoming the 'anti' PRSes, with their mainly all-mahogany construction, scratchplates and bevelled-edge tops; hey, you can even have ordinary dot inlays if you want, not just those polarising birds. Now, for the first time, there's a brand new S2-only creation: the astronomically named Vela.

From the off, however, it sports plenty of PRS DNA: the 'halfway' 635mm (25-inch) scale length, chunky but well-shaped Pattern Regular set neck, top-locking tuners and friction-reducing nut.

What is different, though, is the body shape, and if you think it looks like an offset Custom, you're bang on. The design team cut a Custom outline in half up the middle, moved the bass side up a bit, redrew the curves and voila: the Vela was born.

That retro-looking scratchplate adds another level of style, again differentiating the majority of S2 models from the core guitars.

It also accommodates the majority of the electronics: the Filter'Tron-like Starla Treble bridge pickup and the new-design neck pickup, a single coil with protruding polepieces and what look like height-adjusting screws for the magnetic pole pieces, as featured on the DeArmond-made Gretsch 'Dynasonic' pickups. They don't adjust the height of the poles, though, they're just for show - albeit magnetic, so they possibly influence the sound a little, too.

Pickup selection is via a three-way lever switch, while we have master volume and tone - the latter with a pull/push switch that, pulled up, operates a coil-split voicing on the bridge-facing single coil.

As ever, the output jack is on the side of the body, securely fixed to a metal plate and very gig-ready. Another notable new addition is the top-loading 'plate-style' bridge, with its L-shaped aluminium base, key-hole slots for the strings and pair of brass saddles, which can be intonated by the four adjustment screws.

It all adds up to a very different-sounding PRS guitar, even strummed acoustically: compared with a core-line Custom, it's more attacking in the upper midrange. Amp'd, there's cut and chime from the Starla in bridge position, which is bigger than a single coil, but not as thick as a hotter humbucker.

If you're after bridge single-coil tones, it splits nicely, too, for more edge. The neck pickup, meanwhile, is like an overwound Strat single coil. It drives your amp more, is less spiky, but has plenty of definition.

If we're honest, it's not a million miles away from the oh-so-trendy Gold Foil single coil. The mixed pickup position adds more texture and width - especially with the Starla pickup in split mode - for a very funky Fender-ish voice.

Underpinned with its resonant, all-mahogany construction and set neck, there's a relative roundness and thickness (certainly when compared with a Stratocaster), which works just as well for retro styles as it does under heavier, effects-laden gain.

There's something about this tonal balance that makes for a really good slide guitar tone, too, not least with some power amp gain and that Type D single coil.

Strapped on, the Vela hangs a little differently to a 24-fret Custom, for example: it feels a little more Fender-like. At 6.7kg, it's light but not insubstantial, and overall playability is certainly in line with the much higher-priced core models.