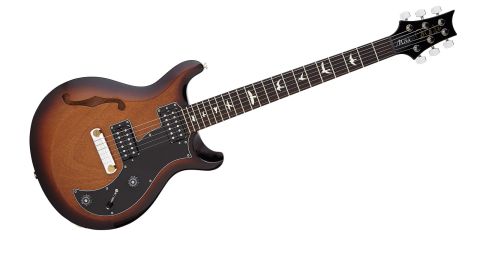 About as far away as you can get from the posh PRS vibe: a cool, slightly semi take on the Mira.

When the S2 range was introduced in 2013, there were just three instruments in the range. Now, with the addition of three new Semi-Hollows, the S2 range is eight-strong and, with prices between £1,198 to £1,559, looking more attractive by the day. Here we're looking at the S2 Mira Semi-Hollow...

In broad terms, this new semi-solid sticks closely to the all-solid version in both shape and specification. So, the Mira's body depth is the same here as the solid version - 43mm - and consequently the actual acoustic pocket on the bass-side of the guitar is pretty small; not too much bigger than the length of the classical-style f-hole.

The back wood has the necessary routing and is then capped with a one-piece mahogany 'lid' (Mira). The top piece, however, on the underside of the f-hole, is also routed so the top looks thinner than it is. The f-hole is unbound, like the rest of the guitar, and unlike the maple-topped 'core line' guitars there is no natural maple edge.

The Mira has an opaque back, sides and neck backs with translucent or 'burst tops. Despite the routing, the original S2 Mira we reviewed was very slightly lighter than this semi version. You'll find the same pickups as its solid brethen, with eponymous uncovered humbuckers.

The humbuckers themselves are USA-designed and made in Korea; while the Mira's Stoptail is the same part as on the USA guitar. We've written plenty about how PRS believes unplated bridge posts, saddles and even tuner posts maximise vibration transfer, and it's the same here as on the core-line instrument.

Irrelevant of the sounds, it's important to remind ourselves just how well this guitar plays. The pattern regular neck shape feels chunky but not over-big; the fretting from a medium gauge, slightly wider than the core line guitar, is immaculate, like the set-up and intonation.

Using a diverse range of semis for reference, including a PRS SE Custom Semi-Hollow with P-90s, a Guild Starfire V with Bigsby and an all-mahogany PRS Singlecut Hollowbody, we set about a rather lengthy sound test.

Unplugged, the Mira has a narrow middly sound. Is it really much louder unplugged than a standard solidbody? Not much. Plugged in, however, the Mira seems a very solid-sounding guitar, but with a little hint of semi-like bloom. With the partial coil-split and three-way selector, not to mention the always-important volume and tone controls, it proves a very versatile instrument.

But whether all of those sounds will suit is debatable. There's quite a sharp-ish high-end, and pulling out a PRS Brent Mason, which has plenty of spank, confirms the Mira sounds a little over-crisp. Volume reduction helps, as does a little tone roll-off, especially if you want a more classic semi-like voice.

There is, of course, PRS's superb build, playability, intonation and tuning stability, and it's very gig-ready. But if we're honest, the sounds are a little less 'dialled in' than the solidbody S2, or indeed the majority of PRS's core-line instruments we've tested. Perhaps it's simply that we were expecting a little more semi-like character.

Conversely, the light weight, resonance and simplicity of the design is really appealing - it's a neat guitar, no question.