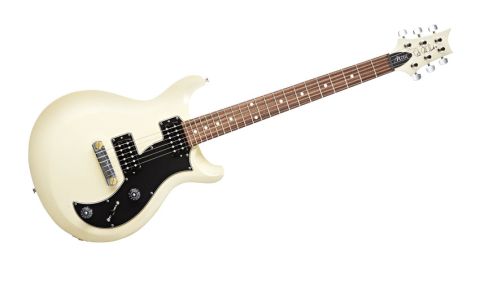 A no-brainer rock 'n' roll guitar. The Mira was always a favourite, and now it's nearly half the price of the original.

Is this PRS S2 Mira a slim vision of the brand's 'super guitar' or a pro-spec USA-made guitar that hits just around that all-important £1,000 watershed?

The new S2 guitars are all re-imagined versions of full-fat counterparts, enabling them to be sold at trimmer price points. Combining a mid-market price tag with the cachet of a US-built instrument, it could be the best of both worlds.

The Mira is still an all-mahogany guitar and the top has an asymmetric bevelled edge, a theme that originated on the original Mira: think SG as opposed to Les Paul Standard. The all-gloss finish doesn't have quite the crisp mirror-like reflection of the core line, but it doesn't let the side down.

The entire construction of the PRS guitar has been re-evaluated, resulting in a new three-piece neck construction, new versions of the Phase II locking tuners, a new finish process and new pickups that are designed in the USA but made in Korea.

In addition to the similar asymmetric bevel topology, the Mira has been redrawn in terms of its outline shape, bringing it a little more in line with the PRS Santana outline. It doesn't really change its playability but it comes in at a full half-kilo lighter than the other S2s in the series and also has the thinnest body depth: 41.9mm.

The 22-fret 'pattern regular' neck joins the body between the 20th and 21st frets and has a very subtle V-profile in lower positions, but actually feels quite deep and full in the palm, less 'big' than the pattern (aka the wide fat) and slightly deeper front to back than the pattern thin (previously the wide thin).

The domed-nose heel protrudes around 38mm from the body's vintage Strat-like radius'd back edge and, of course, this heel extension passes under the neck pickup making it extremely stable, unlike, for example, the Gibson original post-'58 double-cut Special. The nut width is spec'd at 42.06mm, although it measures slightly wider on our model

The pickups on the Mira, uncovered, are modelled on the 245 buckers, PRS's most PAF-alike offering before the 57/08 surfaced in 2008. We might have slightly lower grade pots and rather untidy-for-PRS wiring - along with an unrecessed cover plate that sits onto of the back surface - and a three-way lever pickup selector switch, but we have the partial coil-tap, introduced in 2011, which voices the screw-coil of each humbucker.

It's the only hardtail guitar of the S2 range and uses the standard USA machined aluminium Stoptail and unplated brass posts.

The Mira is noticeably light, but its generous acoustic resonance translates to a garage-band vibe. It's midrange focused but in a good way - and there's a lot of Les Paul Special/SG here. While it seems to suit crunch and trashier, fuzzy voices, there's plenty of clean character, too. Overall, the Mira would suit something that's a little bit dirtier, punkier and more classic.

Game-changer is an already over-used phrase, but it seems the most appropriate term to describe this new S2 guitar. Does it feel like the top-flight core line guitars? Yes. Does it sound like them? Pretty much. Does it cost a lot less and offer a less opulent, more 'blue collar' vibe? Definitely.

The Mira could really widen the appeal of PRS guitars to an audience who might have appreciated the good bits but just couldn't get on with the style or price. Only time will tell.