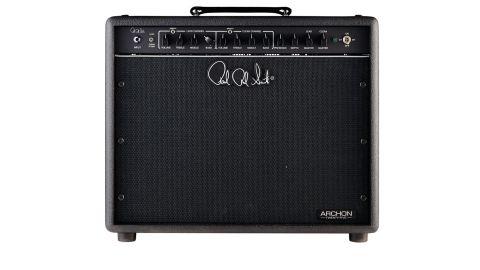 The junior of the range is ideal for space-starved stages and would make a great studio amp, too.

The Archon 25 is the baby of PRS' new amp range, available as just a compact 1x12 combo. It has a purposeful 'none more black' look with silver logos and a thin strip of silver piping over the top of the speaker grille.

There's no cut-out in the top panel of the cabinet, making the controls difficult to see when you're standing over the amp. That aside, the styling and build quality are very good.

Inside the aluminium chassis, these Archon has heavy-duty PCB strips - emulating a turret-board-style of layout - with a chassis-mounted valve base and hand-wired front- and rear-panel components.

This robust construction keeps the heat of the valves away from the circuit boards and should add considerably to the Archon's long-term reliability.

It also means there's a lot of hand wiring and soldering, which is all very neat, clean and consistent - that's quite important, because wiring changes can have a profound effect on performance.

Around the back, there are sockets for the footswitchable effects loop, external speaker outlets with an impedance switch, a half- power switch and bias test points. The impedance switch is a standard toggle - we'd prefer to see a screwdriver type that can't be accidentally changed quite so easily.

Overall, this Archon looks lean, mean and ready to rock, with the kind of solid build and reliability that's needed for constant touring.

As usual, we test the Archon 25 with a range of different guitars, including an old Strat, a Fender Custom Shop Nocaster, an early 70s Les Paul Custom and a PAF-loaded Les Paul Standard.

The Archon combo sound sonically almost identical to its bigger brothers with a high-headroom clean channel that can be pushed into distortion, although it works best at lower gain settings, providing a tight, fast bass response, balanced mids and a bright but not ear-piercing treble.

The bright switch adds a little top-end sparkle, which is handy for guitars with higher-output pickups. It's an airy open tone, not quite the syrupy sweetness of a classic 'blackface', but great with a touch of chorus and delay.

In contrast, the Archon's lead channel has a superb modern lead voice, with rounded mids and a warm treble that retains just enough bite for those 'off the pick' pinched harmonics.

There's a lot of drive on this channel, too. Players looking for mild overdrive effects might be disappointed, but for full-on in-your- face lead and crunch rhythm, it's easy to see why the Archon is beginning to take over as the amp of choice for many modern rockers and metal players.

Even standard single coils can really sing, but to unleash the full fury of this channel, a hot humbucker is what's needed. Then the Archon really sings with a fluid response that almost plays the notes for you.

The footswitchable fixed-level effects loop works well with modulation and delay effects. Another method that adds considerable versatility is to use a graphic EQ with the mids dipped out then switching the loop in for rhythm on the lead channel and taking it out for leads. Adding a touch of short delay-time reverb also helps magnify the Archon's fast bass response, and sounds great for choppy rhythm playing.

To our ears, the Archon 25 sounds better at lower volume than the range's larger models, making it a worthy candidate for studio work, but make no mistake, it's still plenty loud enough to handle small gigging environments.

There's a small but noticeable difference in sound between the high-power (pentode) and the lower-power (triode) switch settings, with the lower-power setting on both amps sounding a little less distinct in the treble area.

On balance, we preferred the higher-power setting, but, both the combo more than matches our expectations with great tone and faultless performance.

After a number of near misses, it looks as though PRS has finally hit the bullseye with the Archon range. These amps have the right image to appeal to modern rock and metal players all over the USA and Europe with bomb-proof build quality and a solid no-frills design that focuses on the tone rather than a long list of sometimes pointless features.

If modern rock and metal is your cup of tea, then the PRS Archon could well be the amp you've been waiting for.