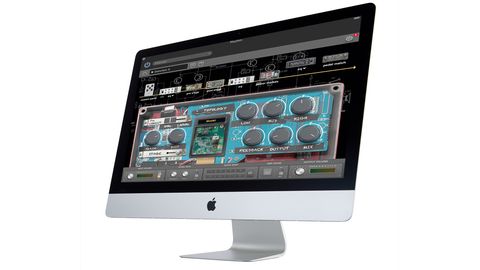 Any players with a head for endless pedal tweaking should definitely give this a whirl.

There are scores of drive, boost, distortion and fuzz pedals on the market, from basic stompers to hand-wired boutique and modded curios.

Now, Positive Grid aims to bring the wide world of drive to its BIAS range of software modellers with new offering, BIAS Pedal.

Positive Grid has gone for the über drive nerds here, allowing you to change parameters and components within any pedal, mimic classic designs and even model your own stompboxes. It's any solder-shy pedal nut's dream!

If you've been too scared to open up your drive pedals to see what makes them tick, now you can have a go without risking your precious boutique circuit boards.

BIAS Pedal's interface is intuitive and easy to navigate. The initial view is the custom panel, allowing you to change the pedal style, choose your knobs and even add your own picture to customise the look of your pedal.

You can tinker with all of the parameters within the clipping stage, output stage and power section, just as if you were modding a real pedal, including low and high cuts (both pre and post the main clipping circuit), gain, distortion (at both the clipping and output stage) and bias controls.

Elsewhere, topology allows you to change your clipping and output components, choosing from germanium, silicon, JFET, MOSFET and tube. These are what defines the character of drive pedals, and provide a useful lesson in the different dirts they create.

For the uninitiated pedal tweaker, BIAS Pedal comes with a good selection of common staples. You'll find Tube Screamers, DS-1s, OCDs, Big Muffs, treble boosters and Fuzz Faces - they're fairly convincing copies, even if a few are a touch over-compressed in comparison with the originals.

An 'amp room' also gives you a handful of industry-standard amps so you can hear your pedal's tones properly and avoiding the ghastly sound of a drive pedal run direct into an interface. These all sound great as well, although perhaps understandably they aren't its strongest point.

You also get a very effective noise gate and a quick snap feature, allowing you to save global amp/gate presets on the fly and bypass your pedal or amp room while you tinker away.

What's really clever is that BIAS Pedal can also 'tone match' real-life drive pedals by listening to your playing through said pedal and emulating it. It struggles a bit with nasty 'dying battery'-style fuzz, but overdrives and distortions come out sounding pretty close to the originals: impressive.

BIAS Pedal is fairly niche - most of us aren't that inquisitive about what makes our favourite drive pedal sound the way it does - and the ability to integrate your creations into BIAS FX means it's most useful for existing Positive Grid users.

That said, for drive gurus, it near-perfectly emulates a host of sought-after tones that cost you a lot more than BIAS Pedal itself.