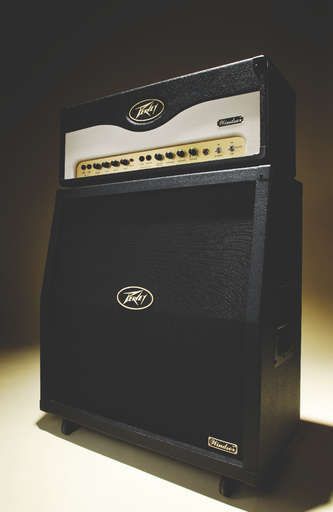 If you're looking for an amplifier that´s free from too many unnecessary bells and whistles and delivers plenty of ballsy rock action at an exceedingly tempting price, we´d suggest firing up a Windsor at the earliest opportunity.

Peavey has launched some highly successful amplifier designs and more often than not the company has demonstrated the uncanny knack of managing to blend solid performance with excellent value for money.

Perhaps the most noticeable recent example is the ValveKing 1 x 12 combo; following its arrival on UK shores, supply was outstripped by demand by some considerable distance.

Another recent hit was the Penta head, which saw its designers finding inspiration in the power and aesthetic simplicity of old-school British valve heads while incorporating some clever analogue voicing circuitry. The company´s new Windsor head returns to late sixties Britain for inspiration, but this time at an entry-level price.

Hauling the Windsor out of its box, there´s an understated classiness exuded by its cream and black vinyl covering, and the gold hue of the front panel is a clear nod towards Bletchley´s most famous exports.

"If you want something a little raunchier, from retro blues-rock or Britpop crunch right through to early Metallica, the Windsor certainly delivers the goods."

That said, we can´t help feeling that the none-more-80s Peavey logo is at odds with the general aesthetic, unlike the scroll typeface used for the ‘Windsor´ legend. It´s a shame that the company can´t come up with something that better suits the retro stylings of amps such as this and the Classic Series models.

Cosmetic issues aside, there´s plenty of horsepower under the bonnet of this amp courtesy of a quartet of EL34s, but sensibly there´s a master volume control to ensure that you can rev up the preamp volume and achieve maximum dirt at volumes that won´t get you evicted.

Along with the expected three-band EQ section, further tonal sculpting is possible thanks to presence, resonance and texture controls. The presence and resonance pots control the tightness of speaker damping in high and low frequency ranges, while the texture knob controls the dynamic response of the amplifier and ranges from a ‘modern´ class A/B to a ‘vintage´ class A feel at either end of its spectrum.

The front panel also provides easy access to effects send and return quarter-inch jack sockets, although some players will prefer these hidden around the back so that stray leads don´t inhibit access to the amplifier´s controls.

Around the back, there´s very little going on other than connections for the mains lead and speakers, an impedance selector and a connection for a standard latching footswitch that triggers the boost function, also accessible by pressing a switch on the front panel.

Everything about this amp suggests that it will have plenty of that upper-mid rich, Marshall-like bawl, and setting the preamp gain volume around two o´clock and pushing the master up far enough to let the power stage do some of the work, there´s classic rock crunch in abundance.

That said, don´t let the retro stylings fool you into thinking that there´s not plenty of preamp filth on tap here; in the upper reaches of the amplifier´s gain range, without the boost engaged, it´s comparable to a hot-rodded JCM800.

Along with a level hike, the boost adds more push in the mid-range, although this seems to better complement the inherent hollowness of Fender single-coils rather than humbuckers.

One significant thing that the Windsor isn´t particularly great at is the cleaner end of the spectrum. Despite the formidable 100-watt power stage, you can't produce a pleasing clean tone to our ears with Alnico PAF-style humbuckers - even with some careful manipulation of the front panel controls, rolling back the guitar´s volume or use of the low gain input.

However, if you want something a little raunchier, from retro blues-rock or Britpop crunch - try rolling the texture control hard left for extra sponginess and sag - right through to a tonality akin to early Metallica, the Windsor certainly delivers the goods.

If you're the kind of no-frills rock guitarist who swears by the roar of your JCM800 or 1970s master volume JMP head, the Windsor would make an excellent back-up rig or low-cost alternative amp that can take you into even dirtier territory if required.