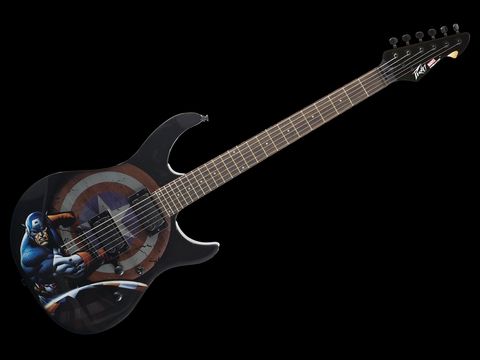 This guitar is at the upper end of quality and playability for its price range making it unbeatable for crime-fighting shredders on a budget.

Peavey has more than a few years' experience when it comes to delivering modestly priced electrics that don't make you instantly regret the outlay - and the Predator has been a long-standing model in the company's range, normally offering respectable bang for your buck.

Here we see the dependable rocker getting the Marvel treatment as part of a tie-in that couldn't have been timed better given the success of the recent Avengers movie. Whereas other guitars in the range are three-quarter sized, these are full, grown-up models appealing to younger players as well as those of us of advancing years with a fondness for comic books.

"A nice addition is the push-pull pot on the tone control that activates a coil-split, giving you a few more tonal options to play with."

Given that recent times have seen the quality of lower-priced electrics improving hand over fist, it should be no surprise that the Predator keeps in line with that trend.

The basswood body clearly comes from the Fender-inspired school of guitar building. That said, it's a graceful twist on the theme. Keeping it simple, you have a maple neck with rosewood fingerboard and 24 medium frets, which are finished very well with no sharp ends or flat spots.

The six-in-line headstock features a newly designed scallop, which makes a remarkable difference to what used to be a fairly ordinary design. Down the other end are the string-through body, tune-o-matic style bridge (which is sure to keep a Hulk-like grip on your tuning), and two Peavey humbuckers.

Controls are similarly simple with a master tone and volume complemented by a three-way toggle switch. One nice addition here is the push-pull pot on the tone control that activates a coil-split, giving you a few more tonal options to play with.

Tonally, the Peavey Predator does hint a little at its low-cost origins. The pickups are a trifle muddy and indistinct, but adding a little more treble to your amp will defeat the worst of this.

There's no doubt this is a rock axe either, with plenty of output on offer and the ever-so-slightly scooped character of basswood, perfect for nailing that power metal version of the X-Men theme you've been working on. Using the coil-split doesn't exactly drop you right into pure Californian territory, but it's another option that brings a little jangle and singlecoil hollowness to proceedings.

If comics aren't your bag, then Peavey offers the Predator EXP without the graphics. Fans of books with pictures, however, will find much to like here with the Marvel Predators sporting a more grown-up, graphic novel style of artwork, as opposed to the more gaudy styles found on other models.