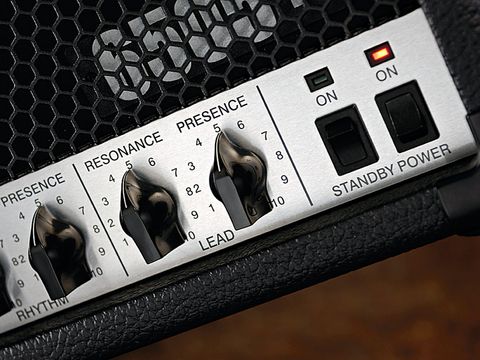 One of the dirtiest heads around - the rhythm tone is what rock and metal players should aspire to. You'll need to sit with it to dial in your own tones, though.

Although the 5150-III has been launched under the EVH brand, this is the latest version of the Peavey-made forebear. The first 5150 stopped players and amp designers in their tracks as it featured a huge number of preamp valves; a feature, so we assumed at the time, designed to recreate the 'Brown sound' squash when using 6L6 rather than EL34 power valves.

It's easy to underestimate the impact the 5150 had, but a quick perusal of the list of users illustrates just how versatile and popular it was: Ted Nugent, Aerosmith's Brad Whitford and, of course, Edward Van Halen himself, not to mention a litany of current metal bands.

The 6505+ differs from the 6505 in that, aside from a some significant layout changes, it possess an extra preamp valve - six rather than five (the EVH 5150-III buckles under the weight of eight 12AX7s) - but the look and character of the tone is intended to remain very close to the original.

It's divided into two totally independent channels that are each controlled by a three-band EQ, alongside pre- and post-gain controls. There's no master volume as such, but the two channels benefit further from their own set of resonance and presence controls that have a profound effect on the overall bottom- and top-end response respectively.

The Rhythm channel also has bright and crunch switches, and the latter is switchable from the remote three-way, as is the channel and effects loop.

Round the back, alongside a mono effects loop, a non-calibrated preamp out and a pair of speaker outs, are a pair of valve bias terminals, which allow for quick and easy biasing should valve replacement become necessary. Unless you know exactly what you're doing in this regard, it's still best to leave it to a qualified tech.

We've always been attracted to the simple livery too. The line of chicken-head knobs and punched steel sheet look as cool as they ever did, and the simple LED displays enable you to know exactly where you are within the amp's infrastructure at a glance.

The second incarnation of the 5150 significantly improved its clean performance, and here the rhythm channel, when modestly set, provides a tone that's certainly clean enough. However, the further the pre-gain control is turned, the hotter and edgier the tones become - and once the control gets past four, the result is dirtier than you may actually require for clean passages.

Utilising the Rhythm channel's bright switch does improve the clean tone, increasing cut and feel, but using the same settings on the crunch channel leads to an overly toppy tone - something not even the presence control can counteract. In fact, we found balancing a useable clean and crunch tone in a rock scenario is a struggle - using your guitar's volume will help.

The Lead channel has gain to spare and, for a huge metal rhythm crunch, set the gain to around seven. Set the very efficient resonance control to seven as well, and the sheer depth, aggressive overdrive and brutal tone in a single package is very musical indeed. It's possible for the tone to become too dense for a decent cut in solos - the crunch channel with the pre-gain all the way up is great for lead, in fact. Again, it's good to be friends with your guitar's volume pot for maximum flexibility.

There's no getting around the fact that the milk float's worth of preamp bottles can make super-high gain settings a tad fizzy, though the dedicated presence control helps no end in rounding off those abrasive edges, or indeed adding cut if you need it. That said, for that huge, on-the-edge-of-melting drive, compression and saturation, the Peavey does a cracking job. Plug in a maple-necked, bolt-on guitar with a Floyd Rose and a meaty humbucker and see exactly what we mean.

The drive provided by the lead channel is great fun to play with - it's yielding to your pick, yet beats you about the face and neck like an angry drunk - just like the 5150s of yore. It's worth taking time to sit with the 6505+ to get the right selection of tones, because a good clean and dirty tone at the same time can be a struggle. But hey, this is all about balls-out screaming. Who needs clean?