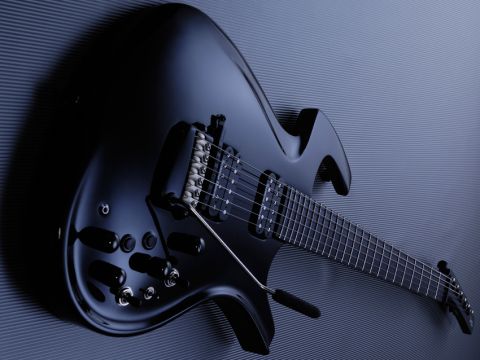 A massive amount of versatility and potential in one guitar. It isn't cheap but it's good.

You could argue that the hi-tech optimism of the 1980s - complete with its numerous guitar-to-MIDI wonder devices - was killed stone dead by two guitar players: Stevie Ray Vaughan and Slash. Any forward-looking remnants were subsequently headed off by the back-to-basics grunge movement as a plethora of futuristic dreams ended up in dusty corners of music shops, bedrooms and lofts.

That was then, but where are we now? Parker Guitars would probably be at the top, or somewhere very close, should you make a list of the guitar companies most likely to embrace new technology.

Since 1993 the US manufacturer has displayed an innovative streak and an apparent desire to move the electric guitar away from traditional 1950s designs. It was the original Fly that broke the mould, not just with its radical shape and construction but also that it incorporated a piezo saddle bridge as standard to add pseudo-acoustic sounds; effectively a 'two-voice' instrument.

Now, with the Fly Mojo MIDI, it's a 'three-voice' guitar, adding synth access.

The Fly Mojo MIDI sports a Roland GK-KIT-GT3 Divided Pickup that allows for full integration with the Roland V-Guitar system, the GR-20 synth, or anything else that can take the 13-pin signal. It means you can access the modelled guitar and amp sounds and altered tunings found in the VG-99 plus the sounds of any synths or samplers connected via MIDI.

Based on the existing Fly Mojo, it looks pretty much the same as any other high-end Parker Fly, bar two important considerations. First off there's the Roland pickup firmly screwed-in between bridge pickup and bridge (hardly noticeable on our black model) and then there's the extra controls for the pickup, which (counting a red LED that illuminates when connected to an appropriate Roland unit) effectively doubles the control furniture.

This guitar is fitted with two Seymour Duncan humbuckers - a Jazz in the neck position and a JB at the bridge. In addition, the bridge sports a six-element Fishman piezo pickup that's connected to an active custom Fishman stereo preamp.

Standard output for the guitar is via a 'smart switching' standard jack that offers a split stereo or summed mono signal depending on the lead that you use. With a standard mono guitar lead you get a mixture of the piezo and magnetic pickup signals, but using the stereo lead that comes supplied with the guitar you can split the two signals to two separate amplifiers.

An adjacent 13-pin output connects directly to a Roland unit, sending the signal both from the divided pickup and from the magnetic pickups (if selected).

The controls on the Fly Mojo MIDI might look a little daunting at first glance, but Parker has been careful in positioning the divided pickup controls so that they don't interfere with the standard Fly controls, which are all in their usual logical places.

Sitting above that array are the three main controls for the divided pickup: a volume control and two small black buttons to scroll up and down through the patches in your connected unit. A mini-toggle switch located directly between the two larger three-way switches controls what's sent to the 13-pin output: divided pickup only, magnetic pickups only or a blend of both.

The look of the Fly may continue to polarise opinion, but it's undoubtedly a very nice guitar to play - finished with great attention to detail, lightweight and well balanced.

With smoothly finished stainless steel frets and the slick carbon-glass-epoxy composite of the fingerboard, this is a guitar that you can definitely whizz around on. Furthermore the vibrato system is one of the best units around, with a very smooth action and accurate return to pitch.

As for the sounds, the magnetic pickups offer plenty of versatility. Set your amp up right and the two Seymour Duncan pickups offer up a full-bodied sound that belies the guitar's lightweight feel. The JB in the bridge position provides access to strident rock tones, while the Jazz at the neck confers the warmer, mellower vibe that its name would suggest, with plenty of sustain for liquid lead work with a cranked amp.

Pull out the tone knob to operate the coil-split and you lose some of that girth and head towards more Fender-like territory.

Bringing the piezo pickup into the equation adds a different dimension. Selecting the magnetic/piezo combination with both sounds delivered to the same amp, it's possible to dial in a little of the piezo sound to add just a touch more edge and attack to the magnetic pickup sounds - plenty of subtle blends are available.

On its own the piezo offers a fair substitute for having to switch to an acoustic mid-song onstage. It's best heard through a mixing desk rather than through a guitar amp, where some stereo chorus and reverb can go a long way in helping the illusion, perhaps a little EQ as well.

Of course, if you want a different acoustic guitar sound, a connected Roland V-Guitar system will provide that and much more. With the 13-pin output in use, both the signal from the magnetic pickups and whatever sound the VG/synth is providing come out of the VG/ synth's own outputs, where the two sounds can be separated if desired with the magnetic pickups being sent through an individual output to an amp from there. There's no provision for sending the piezo signal out of the 13-pin output.

If you'd prefer to keep your conventional guitar sounds separate from the synth output you can use the output jack simultaneously with the 13-pin output, but this disables its stereo operation, so you get a summed mono signal with magnetic and piezo sounds blended, rather than separated. We pointed out to Parker that this is less versatile than having completely separate magnetic, piezo and synth outputs and it told us that the internal circuitry can be easily rewired to allow that possibility, but it would mean that no magnetic pickup signal could be sent through the 13-pin output.

It's an either/or situation with benefits and limitations for either option, but Parker has opted for the benefits of having the magnetic pickups' output sent from the 13-pin output, presumably for the ease of using a single lead until you reach the VG.

What we found, though, comparing the direct sound from the guitar's jack output to the magnetic pickup sound via the 13-pin lead through our Roland unit's output was that there was no contest - the jack output is far superior.

For playing VG/synth sounds the tracking on the guitar is excellent, with everything feeling completely natural, and the range of sounds available is limited only by your imagination or - perhaps more to the point - by what you choose to connect to it.

A Fly's mix of piezo and magnetic pickups is always going to offer more tonal options than a conventional electric guitar, but the addition here of the divided pickup opens up a different world. This is true in conventional guitar territory - with the modelled sounds that Roland's VG system can provide - and in the more esoteric world of synths and samplers, where just about any sound that you can think up can be triggered from six strings and a pair of hands.

It might have extreme versatility and a massive sonic potential, but this isn't a guitar for everybody, the price being the first stumbling block and, of course that doesn't include any outboard synth gear. This guitar could be the exact thing, however, for those who could use an expanded palette of sounds and at the same time want to invest in a guitar that also has many fine qualities in terms of playability and conventional guitar sound.

There are other ways to get access to such a wide range of sounds, not least by adding a divided pickup to your own favourite guitar, but the Fly Mojo MIDI does the job in a way that's both elegant and ergonomic. Roland's electronics and Parker's hi-tech design complement each other perfectly.