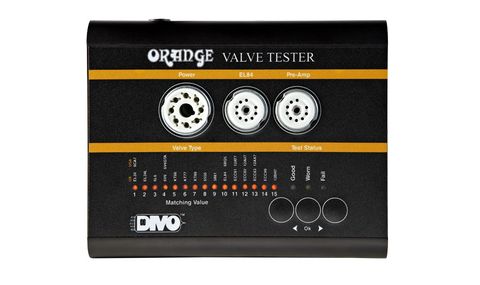 For pro players and all serious musical instrument retailers, it's a no-brainer. If you're serious about your tone (and if you can afford it), the VT1000 is an absolute must.

Orange VT1000 Valve Tester in use

If you have a valve amp, you'll want one of these: Orange reinvents valve testing for the 21st century with the VT1000 Valve Tester.

Back in the 50s, glass bottles known as electron valves or vacuum tubes powered everything from car radios to aircraft undercarriage servos. Valve manufacturing was at its zenith - a massive international industry employing thousands of people and turning out valves by the billion.

But the transistor had already arrived before WWII ended, and once commercial mass production began not too long after, all the great Western valve factories - RCA, Tung-Sol, Sylvania, Mullard and M-OV, to name just a few - gradually shut down their lines as demand dwindled.

Today, despite a confusing plethora of old and new brand names, world demand is serviced by just half-a-dozen factories in Russia, China and the former Soviet Union. Standards aren't what they used to be: the modern market force is low unit cost, not quality, and new valves don't last anywhere near as long as those made back in the golden days of tubes.

So, there's a better than even chance that some of the valves in your amp aren't up to scratch - even if they came from a reputable source. The only way to find out if a valve is performing within normal limits is to test it using specialist devices that need expert knowledge to set up and interpret the results. Until now, that is.

Using an extension of the clever TubeSync valve-monitoring technology that's found in its DIVO OV4 amp management tool, Orange has chosen the 2013 Winter NAMM show to take the wraps off a revolutionary new product: the VT1000 digital Valve Tester.

Even though many Orange amps have something of the lab-equipment look, with their steel control panels and chassis handles, the VT1000 is about as far removed from its predecessors as an iPad is from the code-breaking computers used in Bletchley Park during the Second World War. It's sleek, stylish and built to last. The top plate is 4mm extruded aluminium, while the electronics within (which are being kept a closely guarded secret) are contained inside a tough 2mm steel chassis.

There are just three push-button controls, and only one of these actually makes the VT1000 do something. The other two select the type of valve from a list that includes 15 of the most popular power and preamp valves available today.

Key to the VT1000's operation is a scale of 15 orange LEDs, used to select the valve under test, monitor progress and display a performance indicator. These are joined by three status LEDs: green for good, yellow for worn, or red for fail.

We were challenged to use the VT1000 and make sense of it without a manual. The first thing to do is plug in the laptop-style power supply. Next, use the two up/down selector buttons to find the valve type you want to test. There are three high-quality porcelain sockets to accept octal power valves, EL84s and the common ECC-type twin-triodes.

With the valve located in the correct socket, pushing the centre button starts an automated series of 20 tests that measure the valve's operating performance. The orange LED scale flashes, reducing in size as the tests progress. After roughly two minutes, the test is complete and one status LED is lit, together with a single orange LED that indicates gain, and can be used for matching up pairs or quartets.

Where things start to get clever is the way the VT1000 matches and grades preamp valves. The test sequence runs as before, but this time there may be two performance LEDs - one for each half of the twin triode, with the gap indicating how closely matched the valve is.

If only one LED lights, it's an indicator that both halves are closely matched. There are certain places where this is crucial to performance, particularly the phase splitter/ driver position, where the signal splits into equal halves.

Other cleverness includes algorithms to spot valves that may not have failed, but could do so in the near-future, triggering the red 'fail' light. The VT1000 came with a selection of different valves for us to play with - some good, some deliberately worn or faulty.

However, we immediately set the tester to work on our own collection. Less than two hours later, the VT1000 had tested and graded over 40 power and preamp valves, consigning six expensive NOS treasures to the 'do not use, ever' pile. Oh well...

Next, we tried to improve a modern two-channel amp's tone by replacing the preamp valves in a more advantageous order, based on the VT1000's diagnostics. With the preamp valves graded, it became apparent that the phase-splitter valve was badly worn and way off balance. The rest all had different gain levels and matching results, with the highest output ECC83 last in the chain.

We replaced the driver valve with a matched Sovtek 12AX7C, putting the rest back in a new order with the highest gain and best-matched at the front of the signal chain. As you'd expect, the new driver valve's effect was instantly noticeable, with more output power, clarity and less noise.

Replacing the preamp valves in a more logical order gained a subtle but noticeable extra edge, with slightly more overdrive and a more balanced tone with better bass and mid response. Result.

As well as spotting a duff valve that had gone unnoticed for a long time, the VT1000 allowed us to make informed decisions about which valves went into what sockets, based on their performance. Now we not only know, but can also hear the amp is working closer to its full potential, with the peace of mind that a valve isn't likely to pop halfway through the next gig.

The VT1000 is potentially a game changer - now anybody can test and match their own valves with a neat, portable and, above all, safe device that doesn't need a degree in electronics to understand or calibrate.

For professionals, it can be taken on the road to allow consistent performances, night after night. For music shops it's a no-brainer, adding another potential revenue stream and ending the need to return some alleged faulty amps to the factory.

Possibly the only people who won't like the VT1000 will be those making money from matching valves, bringing us to the one thing we're not completely enamoured with: the price. Although it seems fair set against the competition, £349 buys a lot of valves, and may be a bit steep for some to justify.

We also think Orange may have missed another potentially even bigger market by not including a four-pin socket for the 300B/2A3 power triodes - favourites for hi-fi enthusiasts, with some types costing over £1,000 a pair.

Curiously, the VT1000's line-up includes the ECC99 preamp valve, which is a popular 300B driver, so perhaps a hi-fi-friendly version could be lurking over the horizon. Meanwhile, for many guitar players, the VT1000 could be the missing piece of the jigsaw in the search for great tone.