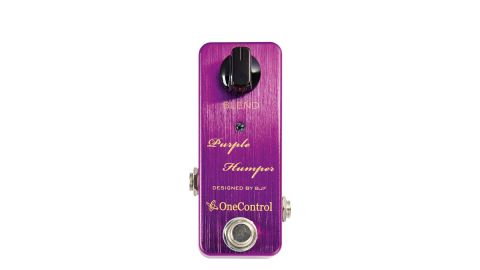 A fat boost in a slim box: a 'secret weapon' to fill out single coils for a more humbucker-like tonality.

While we've all seen plenty of treble boost pedals from manufacturers at pretty much every price point, midrange boost pedals are a bit thinner on the ground.

The Purple Humper is one such beast and is based on the now out-of production and rare BJFE midrange booster, originally developed by BJF for someone who wanted his Stratocaster to compete with an ES-335.

That extra output combined with a tonal shift is what the pedal offers: up to 15dB of midrange boost, delivered via a single Blend knob.

While it can be used to get a more strident sound out of a clean amp, this is a pedal that is at its best in front of an already dirty amp or in conjunction with an overdrive or distortion pedal, where it will not only kick things up a level but will also introduce a bit of a Marshall-y vibe to proceedings.