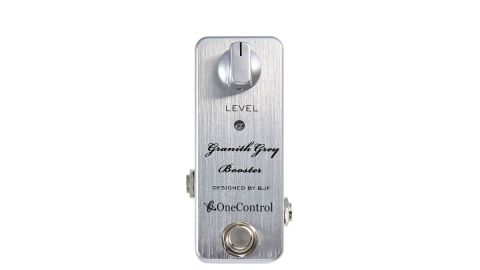 An immensely practical add-on for your signal chain. A very clean boost with a hi-fi sheen.

This pedal from Japanese effects maker One Control is very fitting because it comes with just one large knob! The Granith Grey Boost is a clean boost pedal with a design emphasis on low-noise operation.

Designer Björn Juhl says that the pedal achieves the same signal-to-noise ratio as a high-end audio amplifier, and we can vouch that it adds very little in the way of noise.

At the lowest level of the knob you get silence, unity gain being achieved somewhere near the 11 o'clock point and the boosts beyond that, which means that you can use the pedal to reduce volume as well as boost it, which is useful for making a driven valve amp instantly a touch cleaner.

With a maximum boost of around 16dB, it's not as extreme as some, but there's plenty here to drive an amp or take a dirt pedal up a notch.