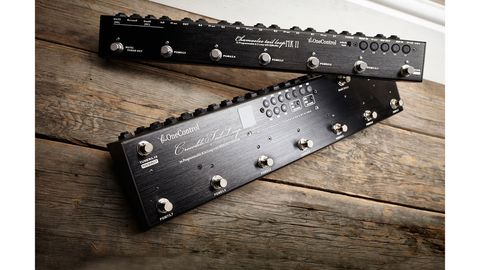 A pedal switcher may be a complication too far for some, but if you like the idea, the operational simplicity of the One Control units is a massive plus point in their favour.

Pedal-switching systems can make a lot of sense in many ways for multiple pedal setups.

For starters, all of your footswitches can be lined up conveniently close to each other in a row at the same height; you can set up a loop to turn two or more pedals on at once with one footswitch; and you can keep certain pedals out of the chain so they don't contribute to signal degradation when bypassed.

One Control is a Japanese company specialising in pedal-switching hardware and the Chamaeleo Tail Loop V2 is a simplified option in comparison to the company's top-of-the-line Crocodile Tail Loop OC10. The Chamaeleo also comes in £200 cheaper than its big brother at £249.

The Chamaeleo Tail Loop Mark II offers five separate loops and can handle 15 presets in three banks of five.As a bonus, it also features six nine-volt DC outputs to power a tuner (accessed via its own footswitch) and five pedals.

The Chamaeleo has a particularly workable footprint, coming in at 55 x 440mm, it could easily slot into a small pedalboard while taking care of power distribution.

While it obviously does not offer as much feature wise as the OC10, it does come without the financial outlay thanks to its £249 price point.