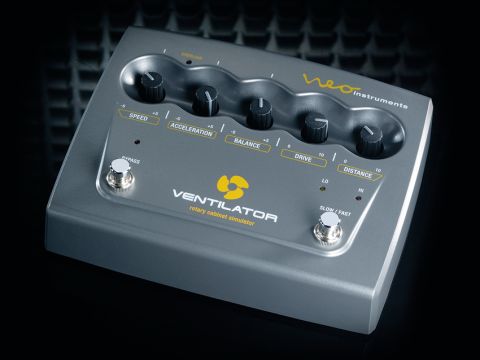 One of the most realistic rotary speaker emulations we've seen - the next best thing to a real Leslie.

You'd be forgiven for thinking emulation effects were a modern invention. Software plug-ins and increased DSP power mean emulation is currently in vogue, but the idea itself can be traced back to 1968, when the Japanese Shin-Ei company released the Uni-Vibe, a foot pedal designed to emulate the sound of a Leslie rotating speaker cabinet.

The Uni-Vibe was massively popular in spite of the fact that it didn't really sound a great deal like a Leslie, but the new Ventilator pedal from Neo instruments promises a much more faithful recreation of this classic sound.

The distinctive modulation effect created by Leslie cabinets has been a live and studio staple for half a century. The signal is amplified, split by a crossover at 800Hz and then fed to high- and low-frequency drivers that feed into rotating horns and baffles.

The Ventilator is a digital emulation of the Leslie Model 122, but the one-knob-per-function interface gives it an immediate, analogue feel. The neatly recessed knobs are intuitively labelled, giving access to the vast majority of options via the front panel.

The Speed control governs the rate of the virtual rotors' movement, while Acceleration controls the rate at which the rotors come up to speed when switching between slow and fast modes.

Round the back, a push-button switch toggles between Keyboard and Guitar modes. The former emulates the highly coloured tone of the original 122 cabinet, while the latter offers the modulation effect without colouring the signal.

Keyboard mode will obviously appeal the most to purists, but Guitar mode may be more appropriate for electronic production as well as satisfying axe-wielding tone fiends. In action, the sound is incredibly authentic - we'd even go so far as to say it's the most realistic Leslie emulation we've ever heard, and we're sure most people wouldn't be able to tell it apart from the real thing in a mix. From subtle shimmer to more intense modulation, this is a seriously usable effect.

The main magic happens inside the cabinet, but the rotating horns are only one part of the Leslie sound; before your signal even hits the speakers in a Leslie, it's amplified through a built-in valve amp.

The Drive control on the Ventilator recreates the effect of pushing the 122's amp hard. It's a basic tube overdrive sound, but for more extreme effects it would be easy to insert a fuzz pedal earlier in the signal chain.

Many rotary speaker simulators also overlook the fact that there's a further variable after the sound leaves the cabinet: mic placement. The Ventilator is modelled on the classic approach, emulating a stereo pair of mics for the high frequencies and a separate mono mic for the bottom end.

The Distance control allows the virtual mic placement to be adjusted. At lower settings, the amplitude modulation effect is much more pronounced, decreasing at higher distances. The Balance control varies the relative levels of the low and high signals, providing a basic but effective tone control.

The Ventilator isn't the most versatile unit on the market, but it does its one trick very well. We'd have liked an expression pedal input for speed control, and it's a shame that a run/stop button isn't included in the basic unit (a Hammond CU-1 switch or Neo's own remote foot pedal, available separately for £59.84, will add this feature), but we're struggling to come up with any major complaints.