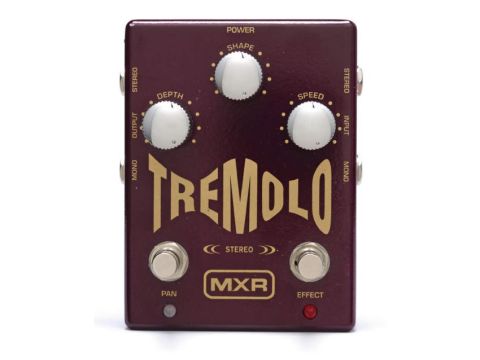 The new MXR tremolo is based on the Dunlop TS-1 and keeps all the effects and controls of the original pedal while putting them in a smaller housing (the size of a Phase 100), designed to take up less space on a modern pedal board.

Power is supplied by two PP3 batteries easily accessed via a plastic lid on the base. Alternatively you could invest in an 18-volt adaptor - Dunlop has a model called the ECB-004 but distributor JHS doesn't actually stock that.

It does, however, have the DC Brick (£133) multi-power outlet, which will do the job.

This pedal can operate as a normal mono tremolo pedal but also has stereo operation, which opens up the possibility of using two amps or creating stereo width in recording.

Three knobs control the sound: depth and speed are self-explanatory while the shape knob is the one that changes the nature of the type of tremolo you hear as it gradually changes the shape of the waveform.

Fully counter-clockwise you get a sine wave, the centre position gives a trapezoid wave, while fully clockwise dials in a square wave.

As well as the standard effect on/off footswitch there's a second footswitch that turns the pedal into a stereo panner - it switches the tremolo modulation phase of the stereo channel so the sound alternates between the two outputs.

With a single amp this pedal is capable of lots of classic tremolo sounds with a huge speed range from a really slow pulse to a fast warble.

The shape knob takes the sound from soft Fender amp trem territory through very subtle variations on the theme to something more hard-edged and stuttery, but never brutal and always sounding musical.

Connecting the outputs to two amps for stereo operation certainly results in a bigger sound.

Of course, that would be the case using two amps instead of one regardless of the tremolo but the effect tends to unify the sound into something bigger than the sum of its parts.

Kick in the pan button and the sound ping-pongs from one amp to the other at the set tremolo speed.

With high depth and a square wave shape the 'one amp on, one amp off' effectis more obvious and a bit gimmicky, but perhaps cool for a special effect somewhere in a set.

At higher tremolo speeds you get an altogether more spacious effect where the sound appears to be chorused with a lovely shimmer more akin to a Univibe or rotary speaker.

Just as when used in mono, careful juxtaposition of all three knobs yields plenty of variations on this sound.