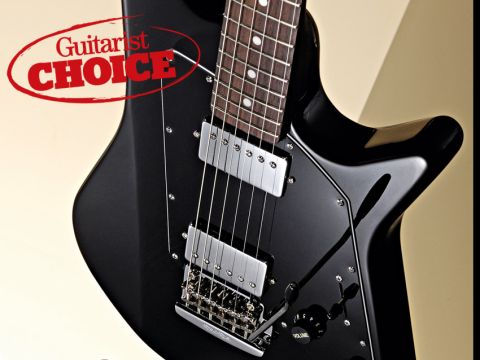 A facelift for the Lee that edges into the 'other' camp. Just try one.

Renowned for impeccable build quality, enviable necks and playability, as well as a top-notch roster of guitar and bass players, Music Man's styling is unique. You tend to love them… or not quite know what to make of them.

Typifying this situation is the Albert Lee model - a quirky, angular design that looks like nothing else and is a perfect fit for the great rocking country player whose name it takes. As he rattles out those unfeasibly quick licks on it, the two are one. For 2010 we get this rosewood-necked, dual-humbucker version. Certainly, in Music Man's world, quirky is in!

We'll lay our cards on the table right away and say that the three single-coil Albert Lee guitar has always been our favourite Music Man six-stringer. It's unique, and in our eyes the design just seems to work.

Triangular-horned and looking like two teams of huskies have tried to pull the pickguard apart at the corners, it shouldn't really hang together at all, but plainly does. What's more, behind the styling is an instrument good enough to have weaned one of the world's most jaw-dropping guitarists off his once trademark vintage Fender Telecasters, so take it lightly at your peril.

Over the years there have been several incarnations and options, but this latest Albert Lee model harks back to his Les Paul days. With its African mahogany body, and select Indian rosewood neck and fingerboard, this is a different beast indeed to his regular ash and maple version.

Fitted with two DiMarzio custom-design Alnico V humbuckers, it also comes as either hardtail or vibrato-equipped - both having hardened-steel saddles and companion Schaller locking tuners. It's a simple enough looking set-up, but the five-way pickup selector hints at some nifty options from the four available coils lurking beneath the polished chrome covers.

Having played rosewood-necked PRS guitars and bare-necked Fender Relics the Albert Lee's oiled and waxed surface feels just as smooth and tactile. You forget it's there, with no stickiness to slow you down. Its vintage medium 'C' profile, tall frets and flattish 'board make a comfortable playing area and the low action, fantastic set-up and 0.010 Ernie Ball strings make for a 'slinky' experience.

Top-end neck access is aided by Music Man's logical sculpted body heel with its solid five-screw neck attachment system, and if you do need to tweak the truss rod, simply insert a small screwdriver into the adjuster that sits between the 22nd fret and neck pickup: brilliant.

As with so many quality guitars these days, the HH is near impossible to fault from a construction point of view, although this one's black finish is the least appealing of the available hues - give us classic white, powder blue or mint green with pearloid 'guard any day; the Albert Lee was made for that sixties 'Chevy' look.

In his early professional days one of Albert's prime guitars was a 1958 Les Paul Custom. And with its mahogany body and Indian rosewood neck the HH is a move in that direction. Of course, no bolt-on sounds like a set-neck - no matter what it's made of - so what we have here is an ingenious mix of lighter Gibson tones and glassy Fender ones.

The two extreme switch positions offer each humbucker on its own, while the centre selection puts both together in series; position two is the outer coils of each humbucker in parallel; position four the inner two in parallel. Noiseless single-coil operation is maintained via Music Man's Silent Circuit system.

As an instrument that seeks to combine single and double-coil tones it will never have the girth of a Les Paul, but the humbuckers are singing, SG-like and musical, while the single-coil combinations provide the 'vowelly' in-between tones that Albert so enjoys. Very appealing.

No matter how many guitars you review, it's always great when something you thought you knew all about gets a new twist that's so cool you start thinking about credit card limits, storage space and where it would fit on stage. And so it is with this exceptionally fine Albert Lee HH.

Ernie Ball Music Man guitars and basses were some of the first guitars to take build quality and finishing to new heights. Indeed, Music Man could rightly be viewed as among the original 'boutique' manufacturers. All that goes without saying here and the HH's devilishly cool look and clever pickup switching makes it immensely desirable.

Music Mans have never been expensive for what they are and this guitar reflects that. But here's a company that continues to push forward and certainly isn't content to dwell on its past alone. If you're not already a convert, it's time you tried one.