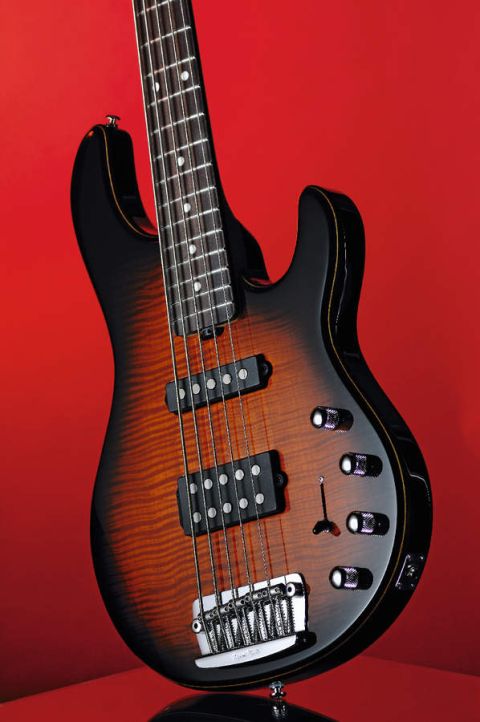 It's always difficult to update a classic but this Anniversary design brings a lot to the table, both cosmetically and sonically!

It just proves the point that when something is designed so well it instantly becomes a classic and establishes a degree of permanency.

The design of the Stingray has never been challenged. It has such fantastic proportions and has always given the impression of being cool as well as being a practical and reliable workhorse.

So what on earth can the Ernie Ball company do to make this Music Man Anniversary 5-string model worthy of a special and limited edition?

The basic bolt-on construction remains the same although a five-bolt neck plate replaces the six-bolt to allow for a neatly chamfered lower heel offering easier access to those all important upper frets.

Hey, if you've got them, make sure you use them! Beyond the compensated nut (that provides for more accurate tuning) lies the distinctive painted headstock with the trademark 4/1 tuner placement that provides a straight pull on each of the strings.

These tuners are in the short shank 'shamrock' style being both neat and traditional in looks. The body is endowed with a coach line veneer sandwiched between the ash core and the bookmatched maple top and what a touch of elegance it provides.

The bridge is the standard, but solid, Music Man design with the strings being top-loaded. Looking at this sumptuous California sunset finish to the body and matching headstock it's impossible to appreciate the other changes that have been made for this Anniversary edition as they lie beneath the surface.

In fact the very heart of the instrument has been subjected to two major innovations. Firstly, a mahogany tone block has been added to the body mass and is located beneath the physical sweet spot of the two pickups; secondly, a new preamp has been designed.

The preamp actually promises a lot according to the accompanying sales pitch: "it accentuates the low-end frequencies while gaining additional clarity, sustain, and response."

Now that's total enhancement in our book so we are extremely curious about this particular element and the sounds it produces.

Without a doubt, electronically there is an awful lot going on and there are actually three different pickup configurations available: a single humbucker, twin humbuckers or the combination of a humbucker with a single-coil as we have here.

Both these pickups are loaded with large pole Alnico magnets, and are supported by the treble, middle and bass rotary controls of the active preamp. This is pretty much as you'd expect but it's the five-way selector switch that holds the real key to the sounds.

Essentially, we have three pickup coils here and the way the Stingray 5 is wired allows this switch to differentiate between each of them. So you can have the humbucker working like that or either coil can be used in various combinations.

So you now get the classic Stingray humbucker sound, two singlecoils together (like a Jazz bass), both pickups together or individual neck or bridge pickups. Now that amounts to a whole lot of tonal opportunities at the flick of a switch.

The looks of this instrument are just so right you'd be forgiven for falling in love with it at first glance, but it's when you strap it on that you really appreciate just how good the Stingray design really is.

The balance is superb and the instrument presents itself to you in a way that makes you want to play. Although the body and headstock are full gloss finish, the back of the neck is left as satin so that the feel is so much more organic.

This does feel a little heavy compared with many five-string basses, but as the wood plays its own part in the overall sound whatever it takes to let this beauty speak the way it does is fine by us.

As expected the tonal palette available is massive, but it's the sheer weight of the tonal signature that takes the breath away.

There is so much substance to the notes being big, fat and warm but there's also an anvil like robustness in delivery that offers a confidence by knowing that whatever you play is really going to count.

Switching between the selection of coil options shows just how tonally versatile this bass is, and that's before making any rotary control enhancements.

It also reveals a few surprises. For instance, there is much more aggression in the tone of the two pickups working together as single-coils as opposed to the whole humbucker in action with the neck unit.

In fact, whenever the humbucker is engaged, you get a much smoother sound. Many a time we've tried to describe the different characteristics associated with these types of pickup - now this bass actually demonstrates it all rather beautifully.

So it's a real educational process in sounds! In spite of all the sophistication of pickup combinations, with a single volume control there is no way of actually blending the pickups.

Now for the purists out there this could be seen as a drawback but in reality the combined sounds are so well matched that with a bit of tonal manipulation the sweet spots really do come alive.

Yes, it's not so straightforward as volume blending, but if you're spending this sort of money then we can only assume you know what you're doing and are capable of using some of your experience to fully appreciate the impressive tonal aspects of this bass.

Producing special editions of classic instruments is always a contentious affair. After all, if you're celebrating 20 years of service (as in this particular case) then surely there can't be much wrong with the bass in the first place, so why bother tinkering with the electrics or adding a few cosmetic bells and whistles?

It's a fair comment but then again why not? Anniversaries are important and they should be marked by something special in our opinion, particularly when some major innovations have been added that may spark a new generation of the Music Man 5-string.

The sounds available are exceptional, even by Music Man standards, but as to how much of this is down to the mahogany block inserted into the body is hard to evaluate. But in all honesty, with a voice that sings the way this bass does, who really cares how it was achieved?

The design team certainly deserves any accolades coming their way. This California sunset finish is particularly striking, which is just as well as all the Anniversary models come with this finish.

Some of you may prefer a non-painted headstock and, if so, you'll be pleased to know that standard headstocks are available and at a saving of £75.

Of course the classic five-string is still being produced so if this is all too much for you and you wish to remain 'purist' then that option is still open.

But as a stand-alone bass in it's own right this Anniversary edition is truly quite exceptional. It has a limited production run so if your appetite is whetted you'd better get a move on!