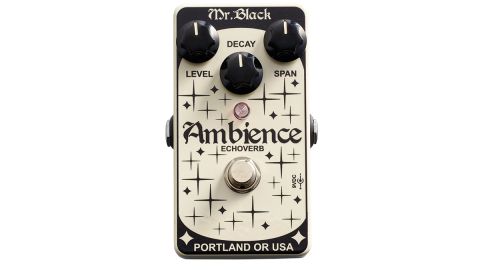 Delay and reverb combine for a whole that's greater than the sum of its parts.

The two delay taps are brought into the mix with the Level knob, which has them at the same volume as your dry guitar when turned clockwise.

The time between the taps is set by the Span knob, which at minimum sounds like slapback with chorus-like pitch modulation, moving up to the two distinct taps shifting further apart just like you'd get adjusting the tape speed in a tape echo with two playback heads engaged.

Bring in the Decay knob and you increase the regeneration for more repeats while simultaneously adding reverb. The overall effect is to create a complex wash of ambience that can be massive.

Some knob positions, notably with full Decay and minimal Span, conjure up seasick oddness, but there are plenty of sounds to be found in this melding of reverb and delay.