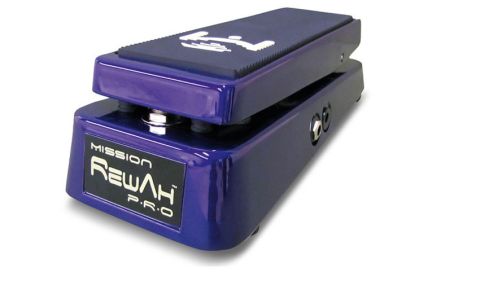 A classy, top-drawer traditional wah that lets you dial in the exact response of your choice.

Mission's claim that the Rewah Pro is the first evolution of the wah since it was invented is somewhat overblown, because we've seen several variations on the theme of changing the tonal response over the years.

Still, the idea here is that the unit can be rewired (Rewah'd - geddit?) with four different circuit modifications to change tonal characteristics. These modifications are carried out via a small internal switch block, accessed by removing the rubber feet and baseplate from the chassis, which only takes a few seconds. Inside, you'll find four two-position rocker switches that can be used individually or in combination, which allows 16 variations.

Switch one increases gain to add slight overdrive to the output transistor, while switch two lowers the filter's centre frequency, reducing the bandwidth for a more nasal wah sound. Switch three brings in more of a bass-heavy sound by lowering the centre of the filter band, while the fourth switch creates a cleaner sound by reducing gain and increasing bandwidth.

Turning the effect on is carried out in the time-honoured manner of pressing the treadle to the toe-down position until it clicks, but there is no LED to show that the effect is active. The treadle has a nice positive action, though, and you can adjust its stiffness using a supplied Allen key.

As part of the Rewah's construction, audiophile-quality components are used throughout, including a custom inductor based closely on the revered 'Halo' type found in vintage pedals. It comes as no surprise then, that the default sound - with none of the switches engaged - is noise-free and classic, with a silky sweep across the wide tonal range.

Messing about with the switch combinations sees plenty of worthwhile variations of the voicings. Switch one engaged, for example, will give you a usefully subtle gain boost when you kick the pedal in, while switch three leans towards a Mu-Tron or voice box vibe, with chewy vowel sounds that are crying out for some lower-string playing.

A recommendation by the designers for turning switch three off and the rest on delivers a very expressive voicing for all-round use, leaving no doubt that this is one versatile pedal.

However, while the switches let you customise the pedal exactly to your taste, and are nicely tucked away inside so you can set 'em and leave 'em, it's easy to get tied up with the baseplate off trying them all out. We can't help thinking that switches outside of the chassis would increase the practicality.

The Rewah Pro's form will be immediately familiar to anyone who's used a wah pedal, but its electronics make it one of the most versatile around in terms of the range of voicings available. With 16 to choose from, this is a pedal that you can tailor to your exact requirements.