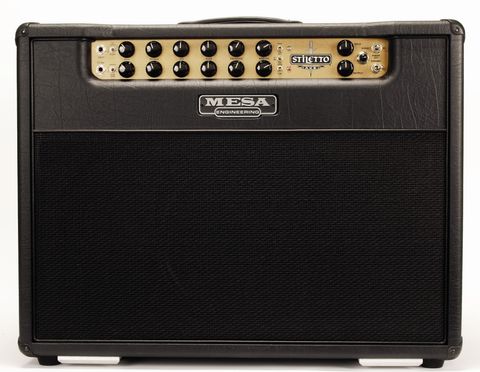 If you want the ultimate in EL34 tone without the hassle of lugging around a head and a 4 x 12, then the Stiletto Ace combo really should be at the top of your shopping list.

Following on from Mesa's highly successful Stiletto Deuce and Trident EL34-powered heads that were introduced at the back end of 2004, Randall Smith's latest creation is the amp that completes the series.

Mesa's standard of fit and finish is consistently the benchmark other amp manufacturers have to aim for, and the Ace combo is no exception. This sample features the 'none more black' styling option - that's black everything, apart from the front and rear control panels, which are finished in a very tasteful antique gold anodised aluminium.

The detailing on every part of the cabinet is immaculate: Boogie's styling is so well-defined compared to the competition that you almost don't need badges of any kind to know this is a Mesa Engineering product.

Take a look at the size of this combo compared to a Mark Series Boogie and you'd be forgiven for thinking that someone had only put one speaker in where two should be. It's a large beast, to put it mildly, and it's weighty too, since the speaker enclosure is a proper sealed baffle design with a closed back and roof.

The intention behind this is to wring every last dB of bass response from the Ace's single 12-inch driver. Thankfully, the cabinet is fitted with Mesa's snap-lock castors and we think many guitar players will be grateful for that, especially as there's only one carry handle.

A box of this size and weight really needs two lifting points - it's awkward to carry single-handed and we wish manufacturers would give more consideration to players who have to lug their own gear around. It isn't fun playing gigs when you're hurting from strained back and arm muscles.

Because of the closed back construction, there's nowhere to stow pedals or leads either, although the footswitch still comes in a useful pocket.

The aluminium chassis and its electronics are typical of Mesa's high build quality, which has been carefully streamlined over the years to improve production without sacrificing standards.

Like its bigger brothers, the Stiletto Ace is a dedicated EL34 design with two very flexible channels. Both feature a set of rotary controls for gain, treble, mid, bass, presence and master volume, but that's just for starters.

Each channel has a three-position voicing switch that enables you to preset its basic character, and a two-position switch so you can select silicon diodes or a 5U4 valve rectifier. These switches considerably expand the Stiletto's capabilities.

On the top channel, the voicing options are called Fat Clean, Tite Clean and Crunch. This last voice is duplicated on the lower channel, where the other two choices are called Tite Gain and Fluid Drive.

Between the tube/diode switches, there's a third mini-toggle that enables you to select channels, without having to use the footswitch. Towards the right-hand side of the front panel are the controls that most modern Boogie enthusiasts will be familiar with.

There's a global master volume with a second Solo volume control, so any voice can be preset at two different volume levels. The mains switch offers a choice of Bold or Spongy settings.

First seen on the Rectifier series, the Spongy option lowers the mains voltage to accentuate the sag of an older amp with a less efficient power supply. The Bold setting is full power and offers more headroom and greater dynamic range.

On the rear panel, you'll find everything you need to hook up the Ace to other equipment. There's a series effects loop and a slave out, both with variable send level, four loudspeaker jacks, and a pair of external switching sockets that take impulse signals from suitably equipped pedal boards to toggle the channel and solo switching functions.

The effects loop also has a hard bypass switch that takes it completely out of the circuit. This switch also bypasses the dual master arrangement for a more direct path to the loudspeakers.

The Stiletto range is Mesa's homage to classic British rock ampli?cation and the Ace doesn't disappoint. Between them, the Fat and Tite clean modes on the upper channel deliver pretty much everything you'd want from a great clean sound.

The former mode has generous bass response, a sweet crystalline treble and a well-rounded midrange, while the latter is less expansive and ideally suited to cutting through in a live mix.

The Stiletto range has recently been re-voiced and both clean modes seem to have a touch more sparkle to them than the Deuce head that emerged when the range was first launched.

The Crunch voice features on both channels and delivers an archetypal 1980s British rock tone. Edgy, raw and highly responsive, with a devastatingly fast attack, this mode is where you'll find pretty much every classic British guitar sound you could wish for.

The increased bass response from the Ace's sealed enclosure really makes itself felt in this mode. While it doesn't quite impart the air-moving thump you'd get from a 4 x 12, it's similar in terms of tone and response, with a slightly tighter low end.

Tite Gain is similar to Crunch, but with a generous boost that adds all the extra drive you need for soloing, while Fluid Drive adds extra midrange and even more gain for the Stiletto's ultimate solo tone - it's perfect for ballad stuff and sustains for days.

There's a slight increase in hiss and hum on this mode, but that's hardly surprising considering the gain levels. However, all of the other modes are remarkably clear of noise, making the Ace equally as rewarding to use at home or in a studio as it is for live work, where the 50-watt power stage is easily loud enough to cope.

Like all Mesa products, this isn't cheap, but the best rarely is. Here you're paying for top build quality, killer guitar tone and a heritage of innovation that stretches back over 30 years.

We think that taking all this into account, the Stiletto Ace is good value for money, although in this league there's a lot of hot competition, ironically most of it also built overseas.