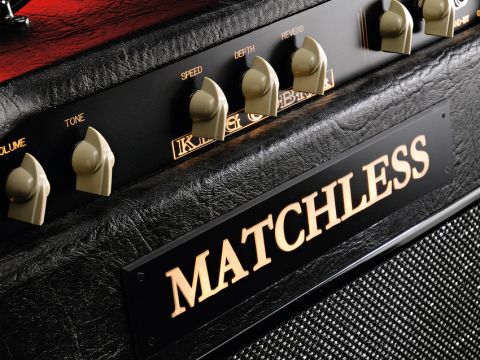 If you like rootsy, rocky, bluesy tones, then don't dare try this unless you can afford it: unbelievable.

The last decade has seen almost vertical growth in the availability of new 'boutique' amplifier brands in the UK. It's one of the many things for which we can thank the internet, beaming us directly to the workbenches of beardy buffs the world over.

California's Mesa/Boogie should rightly lay claim to being the first boutique amp brand proper, but it's Matchless - founded in 1989 - that many associate with the word.

At a time when the rest of the world was moving away from old techniques and designs, the Matchless company hit us with the DC-30: a class A, meticulously point-to-point wired amp, using the finest of components. Nearly 20 years later the Matchless mantra remains the same.

The King Cobra is one of head honcho Phil Jamison's latest designs. At its simplest you can see it as the business end of the DC-30's EF86 channel (the one everybody goes ga-ga over), with added reverb and tremolo.

Additionally it uses a dual EL34 power valve stage, as you'd find in the Clubman series, instead of the DC-30's EL84s, but retains the GZ34-style rectifier. Like all Matchless amps the King Cobra is cathode biased, with no negative feedback and it operates in class A.

The important part about those things is not exactly what they mean, moreover it's that most modern amps from the likes of Marshall, Fender, Boogie et al, are usually fixed bias, with negative feedback and operate in class A/B.

What that means for tone and feel is a different kind of amplifier entirely, and it goes a long way in explaining why many guitarists who've tried one, rave about the depth and quality of Matchless tone and its seeming 3D-like characteristic in a room.

Phil Jamison explains what he had in mind when designing the amp. "The King Cobra design is for guitarists who are looking for an open, lush, rich tone, but with the ability to crank up and hit rock territory. For its richness I pretty much had Robbie Blunt and David Gilmour in mind," he says.

A quick peek inside confirms the Matchless mantra: no circuit boards - just point-to-point wired: this is art, not electronics. More usefully, it's also relatively easy to fix in the event of a problem.

As you'd expect at this price, the rest of the amp is up to snuff; quality ply cabinet construction and tidy finishing, albeit with the sense that it has been built by human beings, not robots. OCD-type human beings, in fact.

After the gain control, the six-position rotary tone control might seem limited, particularly when there are no treble, middle or bass pots. Turned all the way anticlockwise, it's a relatively thin sound, getting progressively thicker and fatter with mids and bass as you click it through the remaining five positions.

There is an additional tone control that works in the power section; the Vox-style cut control attenuates the high-end frequency response of the amp so the more you turn it clockwise, the more the high-end is tamed. It's an instant, intuitive fix to immediately dial the amp to best suit a change of guitar or, more usefully, to get it working right in a particular room or environment.

So far, so classic Matchless, but what comes next is the pulsing, throbbing world of vintage valve tremolo. The first ever guitar 'effect' as such, Matchless has gone for a valve-driven circuit that ranges from a soft, barely audible pulse to full-on staccato.

The downside is that being an all-valve design means that there is an audible throb when the tremolo is active and you're not playing - best to switch it off using the (not supplied) footswitch.

The final control on the front panel is a master volume, which, in Matchless tradition, only works when you pull it out. When the knob is pushed in, the pot is switched totally out of the circuit and the King Cobra acts as a non-master volume amp. A lot of boutique amp buffs really don't like master volumes as they are thought to compromise the amplifier's tone.

Therefore a defeatable master is a good option. Either switch it out, or have the luxury of cranking the front-end for overdrive at low volumes - a very good thing in this case because, despite its ostensibly modest 35-watt rating, the King Cobra is blisteringly loud.

The final feature is an effects loop, which places any chosen pedals in the signal path between the pre- and power amp stages. It runs off a single, stereo jack meaning you'll need a Y cable if you want to use it - 'tip' is send and 'ring' is return.

A look in the open-backed cabinet reveals a pair of 12-inch speakers; as with the DC-30, Matchless has gone for two different drivers: one Celestion G12M 25-watt Greenback and one G12H 30-watter.

Phil Jamison explains more: "We perform an in-house process to chemically soften the speakers to artificially break them in," he says. "The two dissimilar speakers are part of the magic in the sound, the Greenback having the creamy mids to fill in the highs and lows of the G12H30. When pushed, the Greenback adds some more hair, while the G12H30 gets brighter."

With just the six-position tone control and the power amp high frequency cut, it's clear that you can't go from mid-scooped metal to flutey Santana solos with the King Cobra - there's not enough EQ power or flexibility for that.

Instead (and thankfully as far as this reviewer is concerned) the amp definitely sits within a classic roots-rock tonal envelope; real midrange, rounded vintage-style distortion and responsive, punchy delivery.

The infamous EF86 pentode preamp valve has a reputation for aggression, yet while it's certainly lively and responsive, there's never any harshness or unpleasant edge to the drive.

The range of gain from just the single control is considerable; at maximum it's a full-on Black Crowes-style raunchy rock tone, which you can explore further by using either the high- or low-sensitivity inputs.

In fact sensitive is the key word with the King Cobra; this reviewer can't remember his Strat sounding quite so Stratty, his Les Paul sounding so ultimately as it should, and his Telecaster spanking with classic guitar's best traits.

Add some tremolo and reverb to a light overdrive sound and it's easy to get totally tranced out just playing simple chords with the pulses providing rhythmic cues: film-score-tastic.

What does it sound like compared with a DC-30? Well, you get tremolo and reverb obviously, and after that, while it retains much of that huge, almost 3D quality even at lower volumes the EL34 power section gives a tighter, more focused response in the lower mids and bass which you'll either like or you won't!

The good news if you don't is that there's also the Cobra model, which has an EL84 power section. What becomes crystal clear when playing the King Cobra for any length of time, though, is just how versatile it is. Not versatile in a channel switching, 15-million-sounds-on-tap way, but instead in its flexible range of real-world gain that'll span anything from clean country to ragged classic rock.

It has unbelievable dynamic range and responsiveness to your playing, which is something that suits a certain kind of guitar player. The elasticity and almost 3D nature of the tone and projection is remarkable; an enlightening, flattering and endlessly rewarding amp to play.

In these credit crunching times, it seems almost offensive to be reviewing an amp carrying a £3,399 price tag. Unless you're a pro guitar player earning real money from your craft, you'd have to be either mad or rich - or both - to buy one.

Yet playing the King Cobra is an enlightening experience and a perfect example of diminishing marginal returns - so often that last five percent performance means 100 percent extra cost.

What the King Cobra does is nails that difficult relationship between having enough front-end grunt for sustain, while retaining clarity, headroom and projection from the power section. It's something that only a high quality valve amp can deliver and, seemingly to this reviewer, the principle advantage of a well-designed, meticulously hand-wired point-to-point circuit. The tremolo is addictive, the reverb likewise. King Cobra: it's nothing short of fangtastic.