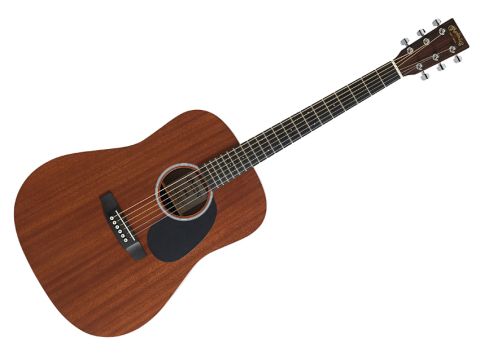 Originally introduced in 2001, Martin's Road Series was part of a serious attempt to make the kudos of owning a Martin more attainable. Costs were lowered due, in part, to production being moved to Martin's Mexican facility, the use of HPL for the back and sides as well as an ultra-simple spec.

In contrast to the early Road Series models, the DRS1 is an all-solid guitar. Well, actually, that's not technically correct.

"As impressive as the DRS1 is visually and in terms of its presentation, nothing prepares you for the boisterous, lively tone."

Stratabond is produced from white birch, which is dyed and laminated into large blocks before being carved into shape. This process reportedly increases rigidity and stability - qualities crucial for a guitar's neck.

Visually, this design feature is striking, as the sweeping lines of the shaped laminate catch the eye. Some purists may shudder to see such unashamed use of laminate; others may see it as innovative, progressive and responsible guitar building.

Further evidence of Martin's responsible approach is found in the use of sapele for the DRS1's unbound body. As mahogany stocks become ever more depleted, some makers are spending a great deal of time and finances sourcing alternatives.

One credible option is sapele; a durable wood native to tropical Africa, historically used in flooring due to its attractive grain. It's also widely used by Martin's closest competitor, Taylor.

Inside the sapele body, as with all Martin guitars with a mortise/tenon neck joint, the DRS1 is fitted with the A-frame 'X' bracing. In practice, an angled bridgeplate creates a 'box' under the bridge and this design adds strength to the top.

In some ways, the DRS1 resembles the highly popular, though equally understated D-15M, although sapele has more of a brown than orange hue. The DRS1's ornament cupboard is pretty bare, with nothing more than a simple black and white triple-ring soundhole rosette, a black single-ply pickguard and 3.2mm dot fingerboard inlays.

As with the fourth generation of Performing Artist guitars, black Richlite - a composite resembling ebony made from recycled paper and resin - has been used for the fingerboard and bridge.White Corian is used for the nut, while bone-substitute Tusq is employed to form the compensated saddle.

A little piece of luxury might be offered by the slice of Indian rosewood fitted to the face of the headstock… it is in fact high-pressure laminate (HPL).

The DRS1 boasts the low-cost Fishman Sonitone preamp system, which features a soundhole-mounted preamp with rotary controls for volume and tone located just inside the bass side of the soundhole.

Though not issuing from Martin's US facility, our review DRS1 shows absolutely no signs of any lapse in build quality or standard. Every joint is super tight, every line clean and crisp. There's not a trace of excess glue to be found anywhere and the satin finish is smooth and uniformly applied.

Although the DRS1 is a noticeably bottom-heavy guitar, it remains a comfortable one to play. The modified low oval neck profile coupled with a 43mm nut width makes for a full yet not chunky feel.

The set-up is as good as it gets and barre chords up and down the neck are a breeze, as are single-note runs anywhere up to around the 16th/17th frets.

As impressive as the DRS1 is visually and in terms of its presentation, nothing prepares you for the boisterous, lively tone. With its snappy, tight bass the DRS1 pitches chords with depth and soul while a bright, clear top end adds sweetness to the timbre.

Of particular note are the stirring articulate mids, which offer a likeable tone for fingerstyle, hybrid picking and flatpicking alike. Overall the DRS1 has a responsive, dynamic projection too.

Plugged in, the DRS1 has a bright, vibrant tone that, when pushed, becomes a little brittle. In truth, the Fishman system fitted is entry-level and it does little more than simply offer a usable amplified output.

The tone control doesn't have a significant effect on the output, but it does just enough to tame enthusiastic strumming. That said, the package as a whole works very well and, again, for the cost, you're getting a lot of guitar for your money.

While enjoying the strident output of the DRS1, we had to keep reminding ourselves that this Martin electro - which comes complete with a 300 series hard shell case - an MSRP of only £800, cheaper on the street. In terms of sheer value for money, not least with that iconic name on the headstock, the DRS1 is going to take some beating.