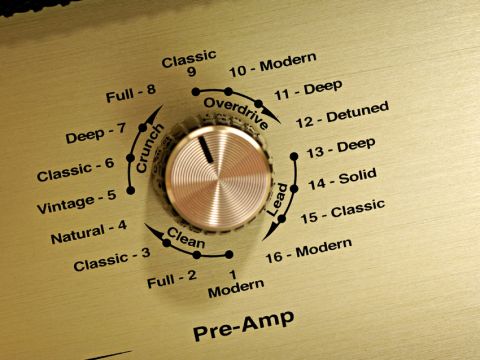 A strong entry into the realms of digital amp modelling for Marshall, but in this price range this amp won't suit every player's tastes.

What do you do next when the amps you've built have shaped the sound of rock guitar over decades? If you're Marshall, then you build them all into one amp!

With the help of software developers Softube, Marshall has combined some of its most-loved amps into 16 digital preamp models, added programmable digital effects, and squeezed the whole lot through an EL34 valve-based power amp section.

The preamps are selected from Marshall's enormous legacy, from the '60s-launched 1959 'Plexi' through to 2009's Haze40 combo. The preamp section is split into four categories: Clean, Crunch, Overdrive and Lead, with four models in each.

Crunch Vintage fuses the 1974 combo and 'Plexi' head, and playing a Strat in the neck position with a slight tone roll off will get you an authentic sound that lends itself instantly to Hendrix/Frusciante chordal embellishments.

The versatile, mid-rich Overdrive Classic is one of our favourite rhythm sounds in the JMD100. It's based on Marshall's JMP1 preamp from the 90s and laps up stadium-filling powerchords from our bridge position humbucker.

Hard rock and metal players will be drawn to the Overdrive Deep and Detune models, based on a JCM800/Bluesbreaker II combination and Marshall's Mode Four head respectively. They both offer extra gain with a reduced mid-range for tight, punchy, high-octane riffing. The Deep Overdrive has a more vintage quality to it, with the Detune giving the most modern high-gain sound in the collection.

Setting the Lead Deep sound (Bluesbreaker II and Haze40) with the gain low and a higher master level gives you a smooth, thick, classic blues sound that has you pulling out your best Clapton impressions, while cranking the Lead Modern model practically forces us into playing the intro to Sweet Child O' Mine.

Digital models are a first for Marshall but, with Softube, it has created a diverse mixture of classic and contemporary tones that on the whole react in a faithful way to that of a true valve amp.

Last year's more affordable all-valve MA Series (from which Marshall supplied a cab for this review) might deter purists, but with additional pro features like 28 programmable scenes, series/parallel FX loop and MIDI control, it's clear that this series is aimed at a different type of player....