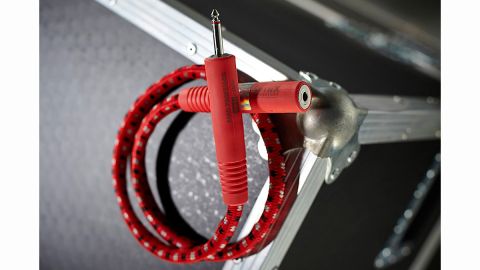 The bottom line is, if you can comfortably afford it, try it for yourself and see if it makes a difference for you.

The RED is a cable extension about three feet long, with male and female ends.

You plug your normal cable into it and then plug the red cable into your pedals or straight into your amp. Mad Professor says that the cable is based on its work with Kuopio University and the Spindeco company, and that it features SpinX, a nano technology that uses a magnetic field to align electrons into a straight signal-transporting chain.

This is said to optimise the signal chain and minimise signal loss, while offering faster signal transfer and more dynamics.

Now, the mere announcement of this cable has so far proved controversial, with less-than-favourable appraisals online.

However, we're open-minded here and always up for anything that improves tone and feel... And yet, in a test that allowed instant switching between the RED and a normal lead, this reviewer couldn't hear or feel enough of an improvement to warrant shelling out £149.

However, that's not to completely write off the RED: for some players, having what they regard as the best possible components in their signal chain inspires a confidence that helps them play better, and there's no harm in that.