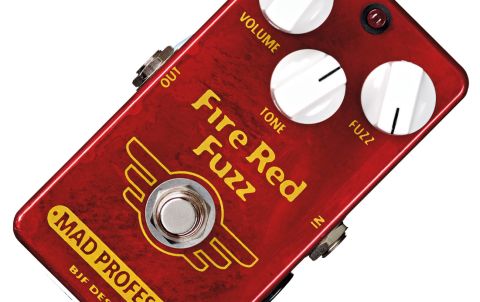 A simple to use fuzz pedal with a good range of tones, but maybe a bit overpriced for a relatively straightforward device.

There's no shortage of retro fuzz pedals around these days, so your choice boils down to whether you prefer the thin, raspy Tonebender or the thick, flutey Fuzz Face. Conveniently, the Fire Red Fuzz does a bit of both!

It's a case of two obvious controls (volume, fuzz) and a tone control with hidden depths. Here, the tone control produces that mellow liquid fuzz in the anticlockwise position, cutting the mids slightly at 12 o'clock and then producing a thinner, raspy fuzz at the clockwise end.

Although initially wary of a 'jack of all trades' pedal, we were instantly impressed by the range of sounds on offer.

High-fuzz settings with the tone control turned anti-clockwise aren't as squishy as some fuzz pedals, but you can still get that endless horn-like sustain with a Strat's neck pickup.

The middle position on the tone control is less interesting, as the mid cut makes it sound a bit too much like a regular distortion pedal. But the groovy sixties fuzz credentials return at the upper end of the tone control's range, with some cutting sounds reminiscent of The Yardbirds.