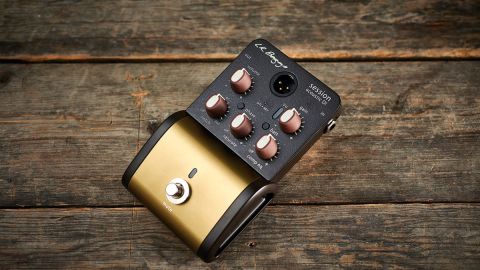 Quality mastering in a pedal with feedback rejection? That's about the size of it. Niche, but very nice.

The Acoustic DI also has a similar bronze/ brown metal-shrouded design, yet is under half the footprint. The gently curved lower section houses the sturdy metal on/mute footswitch (there is no bypass) with power-supply input on the right-hand side, although it'll also run on a nine-volt block battery or phantom power.

There's a phase switch, too, which can alter the low-end characteristic and is also the first stage of feedback rejection, plus XLR balanced output and standard jack in and out.

On the upper left side is a ground-lift slide switch. On the right side is a four-position high-pass filter switch, which attenuates your low end with a choice of four shelving points: 40, 80, 120 and 200Hz.

Unlike the Swiss Army knife concept of the Venue DI, however, the Session Acoustic DI's role is more specifically aimed. "Inspired by the LR Baggs Handcrafted Video Sessions and our experience in some of Nashville's great studios," says LR Baggs, "the Session Acoustic DI brings our signature studio sound to your live rig."

So, while the volume, gain and notch controls are all straightforward, the 'tricks' lie with the saturate and comp EQ controls.

The former aims to emulate the sort of analogue saturation, which, as LR Baggs explains, is "often used by studio engineers in post-production: saturation adds warmth, dimension, and pleasing harmonics while smoothing the signal for an enhanced mix."

Comp EQ, meanwhile, "features three narrowly focused bands of compression that tame common problematic frequencies: the low, mid, and high frequency compressors are essentially 'touch-sensitive' EQs that respond in real-time to your dynamics. The harder you strum, the more they compress and vice versa." Okay?

Using a variety of both steel- and nylon- string guitars (although we don't think this is designed specially for the latter type), the Session DI initially seems to provide quite a subtle effect. Starting with the saturate control, you definitely hear an increase in the thickness right across the frequency range, but centred, seemingly, on quite a wide midrange.

It might seem at odds with a typical mid-scooped modern electro sound, but we'd favour a less-is-more use of this control unless you do want to evoke some almost tape-like saturated distortion, which we certainly managed.

The comp EQ alone might be a reason to buy this pedal. Introducing it from the off position, it's subtle, but you notice a progressive swell to the decay and a softening of the attack that's certainly an enhancement.

For many, this is going to prove simply too expensive and too subtle, but when it's not there, you miss it. It's easily the best single-knob compressor for acoustic guitar we've encountered: the notch filter is superb and the saturate control, used sparingly, adds just the right kind of colour.