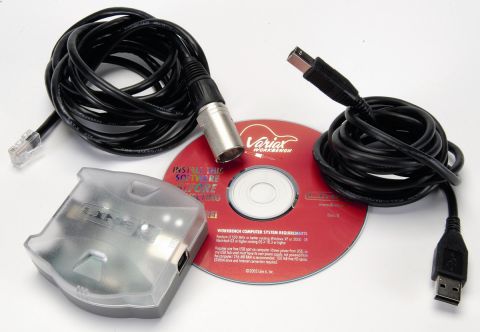 A verstatile if slightly confusing bit of software for any Variax owners.

It may come as a disappointment to the carpenters among you to learn that the Line 6 Variax Workbench has almost nothing in common with an actual workbench. If you want vices, spirit levels and a place to keep screwdrivers, may we suggest a trip to your local DIY store instead and leave the rest of us to peruse the latest offering from the heavyweight champion of modelling technology.

If you're familiar with Line 6 - and, unless you´ve just emerged from a cave, we´ll assume you are - then you'll have already realised that the Variax Workbench is a virtual workbench. It lets you customise the models within your Variax guitar, save the changes you've made and then trade them online with other users. Brian May had to smash up a fireplace to create his trademark Red Special; EVH´s bastardised guitars were the product of many a lonely night spent with a pair of pliers. With the Line 6 Workbench, you can now create an arsenal of customised guitars without ever hitting your thumb with a hammer.

The Workbench operates in tandem with any Line 6 Variax electric guitar. Admittedly, this does add a fair whack onto the £60-or-so price of the Workbench software, but with the Variax 300 so reasonably priced (that´s what we tested the Workbench with), it´s not as much of a pain as you might think. Alongside the Variax, you'll also need a PC equipped with Windows XP/2000 and a USB port, plus an amplifier. Workbench will run effectively on a Mac too.

To begin, insert the Workbench CD into your computer. While fairly straightforward, we didn´t find the software installation process quite as intuitive as some of the Line 6 products we´ve tested. By the time we registered our Variax, reconfigured the guitar´s memory banks to let us use it with the Workbench, and established that, no, we weren´t interested in taking out a subscription to Rolling Stone, a good 15 minutes had ticked by.

With the Workbench icon on your desktop, you connect the Variax to the converter box via the supplied RJ-45 connector and plug that into the USB port of your laptop. Then you take the TRS cable (it comes with your Variax) and plug it into the XPS Mini power supply. Then - deep breath - you link the ‘Output jack´ of the XPS to your amp via a normal guitar lead. Your bedroom will look like spaghetti junction once it´s done, but you can dump half the wires before you hit the stage.

The standard Variax 300 has models based on a selection of classic guitars, from the Gibson Les Paul to the Gretsch Silver Jet. The tonal nuances of each guitar are modelled, as closely as possible, from the character of the woods to the wiring of the pickups. That´s fine if you want to emulate a 1958 Les Paul, but how about if you fancy sticking a Strat-style pole-piece singlecoil in the neck? Most custom shops would tell you to sling your hook, but the Workbench turns such hypothetical flights of fancy into reality with a few clicks of the mouse.

We kicked off by choosing a Les Paul via the model select knob on our Variax. To remind ourselves of the blueprint, we gave it a strum in its original form and were hit with the beefy PAF roar that Line 6 have always nailed so well. Then we got the virtual hacksaw out. The logical first step was to get rid of those humbuckers, so we headed to the ‘Pickup´ section and scrolled down the list of substitutes. As usual, Line 6 have laid the options on with a trowel, offering a choice of 17 different pickups that cover everything from Gretsch-style Filtertrons to the kind of P90s you'd find on a Les Paul Goldtop. In the interests of undermining everything the Les Paul stands for, however, we dropped a Strat-style singlecoil into both the neck and bridge...

We were intrigued by the combination of a mahogany body and singlecoil snap - it works much better than you might think, actually - but continued to tear up the blueprint by adjusting the position of the pickups on the body and rotating them by 20 degrees. We then adjusted the levels to make the bridge cut through more than the neck, put them slightly out of phase and tweaked the resistance of the tone and volume controls. Beyond a certain point, you'll probably have to guess how authentic it all sounds (we don´t know anyone who's carried out this customisation in ‘real life´), but there´s no doubting the sheer versatility on offer here.

Once you're completely satisfied with the body and pickups, a separate section allows you to save your new customised tunings. Just turn your amp up so that you´re unable to hear what the unamplified strings are doing, then select a tuning from the Workbench´s comprehensive list. While we were initially tempted by a Keef-style Open G, we eventually settled on Drop D and watched in awe as the software virtually reconfigured our tuning, dropping our low string (previously tuned to E) to a bowel-quaking D.

The Workbench would be kind of pointless if you couldn´t unleash your custom models on a packed venue, so once you've finished tweaking, give your creation a name and save it into the Variax´s memory banks. Here again, we didn´t feel the Workbench was as intuitive as some Line 6 gear - it wouldn´t have hurt to provide an instruction manual, for instance - but after a few aborted attempts we managed to get our heads around the process.

If you´ve already got a Variax and feel you´ve almost exhausted its potential, we wouldn´t hesitate to recommend the Workbench. It offers hours of fun, tons of options and the opportunity to create a tone like no one else on the planet. If you haven´t got a Variax, we´d think carefully before blowing the £400-plus on the guitar and Workbench. This product isn´t designed for someone who´s satisfied with their Telecaster and Marshall. It´s a playground for guitarists who are continually searching for the ultimate tone and who change their setup more often than their socks. If that sounds like you, then the Line 6 Workbench offers a level of customisation that will blow you away. The benchmark has been set.