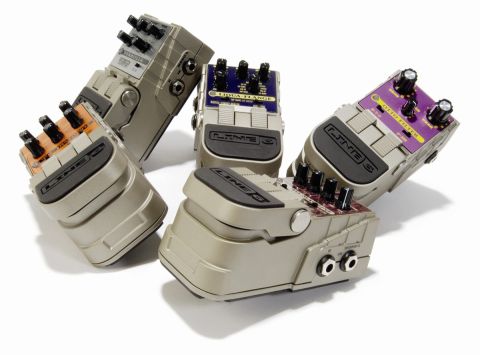 A very competent pedal for a variety of retro sounds.

The Otto Filter (say it in an American accent if you're wondering about the name) is designed to recreate all those squelchy seventies funk sounds and much more besides.

The filter opens or closes according to how hard you hit the guitar strings, and the three main controls govern exactly how it does so.

Sensitivity is self-explanatory, while range adjusts the range of frequencies covered by the filter sweep. With the peak control, you can set the shape of the filter's waveform; turning the knob clockwise sharpens the waveform, creating a more dramatic effect.

Those are the basics, but there's more: there are three filter types here. Low pass cuts the high frequencies for that classic funk squelch. Band pass cuts all but the middle frequencies, the centre point of which is controlled by your picking attack.

Finally, the twin filter is a Line 6 special, whereby two band pass filters move in opposite directions. Whichever filter you use, another switch allows you to choose whether the filter sweeps up or down through the frequency range.

The Otto Filter is certainly not a subtle effect (there's no way to slow down the filter sweep, as on the FM4) but it does its job well.

We found the low pass setting the most musical of the three; perhaps that's because it's so evocative of all those seventies funk sounds. Band pass is more like an automatic version of a standard wah pedal, but with the extra control offered by the range and peak knobs.

Of the three, the twin filter is the most dramatic, but not surprisingly it's also the hardest to fit comfortably into a musical context. It's not a million miles away from the vocal-like filters now included in several multi-effects units, and its throaty 'ya ya' sound sticks out like a sore thumb - but it's still fun!