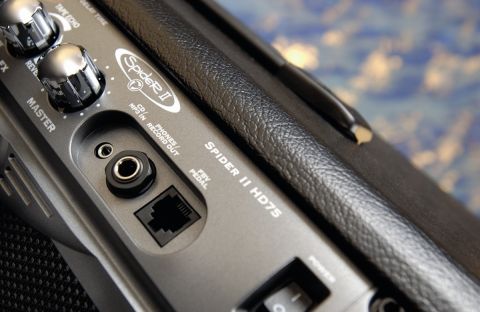 If you´re a metal or heavy rock player looking for a gigging and rehearsal amplifier on a budget, and have decided to go down the head and cabinet route, the HD75 has to be auditioned.

The big brother of the Spider II 15 and 30 combos is here in the shape of the HD75 head.

And it boasts a price that proves that Far Eastern manufacture and digital technology get cheaper on a monthly basis, which can pay dividends for the real-world guitarist looking for a versatile gigging amp on a budget.

First impressions are that physically, without the burden of valves or huge transformers, Line 6 could have packed this head into a much smaller box. Okay, so maybe it wouldn´t look as cool atop a 4x12, but there´s something to be said for saving on boot space wherever possible. As it is, there´s not a great deal going on around the back of the head, with just a pair of four-ohm speaker outputs.

The front panel is a different story. Drive, bass, mid, treble and channel volume controls are accompanied by rubber buttons that activate the clean, crunch, metal and insane channels. Each of the four buttons also allows you to store a preset sound - simply set it up as desired, including effects, and hold the corresponding button down for two seconds to save. Now all settings, master volume aside, can be recalled.

The three overdriven channels are based on amplifier models that will be familiar to most users of other Line 6 products. Crunch is a ‘brown´ overdrive based on the Van Halen model of a 1968 Marshall ‘Plexi´ Superlead with a Variac voltage regulator and jumpered input channels. Metal is a Mesa Dual Rectifier emulation, while insane is a Line 6 home-brew model with truckloads of distortion and a huge capacity for bottom end.

The HD75´s Smart Control FX section is controlled by a pair of pots, with a tap tempo button for adjusting delay times. At any one time, you can have one modulation and one ambient effect on together. The first pot controls chorus, flange, phaser and tremolo effects with a range of settings that get faster and more intense throughout the sweep denoted for each effect. The principle behind the second pot is the same, but this time you have sweep echo, tape echo and reverb to choose from. Sweep echo and tape echo are both effects that have precedents on other Line 6 units, and the time/rate of both can be tweaked using the tap delay time button. The tap button also toggles a built-in noise gate and distortion boost on and off.

Other front-panel features include a 3.2mm mini jack that allows you to connect a CD or mp3 player and jam along with favourite tracks. A larger jack socket is a headphone and recording output that mutes the speaker when in use. The final connection is a DIN socket where an optional footswitch can be connected. At this price, it would be churlish to complain that one isn´t included.

Powering up and starting with the clean channel, we are greeted by a vast, pristine clean voice that just doesn´t want to break up, even at gig volumes with a Gibson SG Standard. The wide range of the onboard equalisation ensures that a variety of clean voices can be dialled in, from crystalline high-end sparkle to warm, fluid jazz.

Moving on to the crunch channel, spotless clean tones clearly aren´t on the menu. Whether or not the sound recreates a ´68 ‘Plexi´ with channels jumped and a Variac is subjective and largely irrelevant; the important question is, does it sound good? Happily, the answer is a resounding yes. At the lower end of the channel´s drive spectrum there´s a nice alternative clean voice, with a little valve-like edge and bite that blooms into a throaty Marshall-like roar as the gain winds up. With judicious use of the EQ, you can create truly muscular and convincing classic and alternative rock tones.

Flipping to the smorgasbord of dirt that is the metal channel, you´ll find acres of gain with easy harmonics and bags of sustain for languid lead lines. The middle control is a key component in shaping the overall sound, but it´s pretty powerful and only minor adjustments can have a big effect on the way the sound sits in a mix. If, for some reason, there isn´t enough gain for you on this channel - and there really is a lot - then switch to the insane channel.

Surprisingly, the lower reaches of this channel´s gain allocation are to our ears more useable than the equivalents on the metal channel. Wind up the drive and, as on other Line 6 ampliifi ers and modellers that feature the insane sound, there are obscene levels of bowel-disturbing dirt available to suit even the darkest of black metal lords. But it´s not all piercings and leather trenchcoats. Roll most of the bass off, and the insane channel delivers grungy garage rock fuzz - try engaging the onboard distortion boost for even more fireworks.

The built-in noise gate tames extraneous buzz and hiss from the metal and insane channels effectively, but its fixed threshold means that you may notice it kick in suddenly and squash the tail end of very long sustained notes. All of the channels sound just as good at bedroom volumes, but crucially don´t wilt when wound up to gigging and practice levels.

In the effects department, the onboard chorus/flange sounds aren´t the warmest or most analogue-like, but they provide some useable textures nonetheless. More pleasing are the phaser and, in particular, the tremolo, which is very well voiced indeed with a dramatic choppiness that is musical and arresting. Disappointingly, the sweep echo doesn´t sound as grainy as the equivalent sound on the DL4 delay stompbox, and while the tape echo´s repeats grunge up nicely, some players may miss a straight digital delay. The reverb has an unmistakeably digital quality to its decay, but in a band context this isn´t really an issue.

If this head was equipped with just its clean and crunch channels, we'd still find it an attractive, versatile option at the price, let alone with two dirty extra channels and a useable set of effects. The HD75 isn't going to compete with the power and dynamics of the high-gain amplifier circuits that it models in a direct head-to-head. That said, even a second-hand Dual Rectifier is going to set you back well over a grand, and as for a 1968 Marshall Superlead...