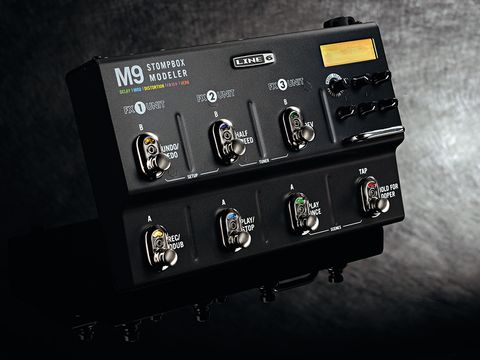 Compact but crammed with sounds, this is a great alternative to a collection of stompboxes.

Colour-coded displays, chunky guitarist-proof footswitches and an undeniable Cornish/Bradshaw vibe makes the M13 stompbox modeller the processor of choice for many gigging players these days. For those wanting something a little less expansive, we now have the M9: a stripped-down version of the same… except it's not that stripped down!

Aside from a reduced front panel and the lack of a stereo FX loop, the feature list compares favourably with the M13: same effects (109 in all), same infrastructure and the same impressive chunky build.

One important feature that's worth getting your head around is the 'scenes' function. This allows you to recall a number of user-inputted combinations of effects - think of it as 24 different pedalboards if you like - and will prove invaluable if you're the member of more than one band, especially if they're of different styles.

You can input and recall a number of scenes for your function band gigs, others when a stint with Hell Budgie comes around, and another for your regular blues jam night. Another way to approach it would be to have your Hendrix scene, your Gilmour scene, Jonny Greenwood, The Edge… you name 'em. You just program the scene then recall it at will, job done....

Hear the Line 6 M9 in action in the following demo:

There are two scene modes too, momentary and latch. The former puts the M9's display back into basic mode (with effects parameters displayed as when not using the scene function) or the latter, which enables the display to only depict the scenes themselves.

This may all sound overly complex, but the processes involved in editing effects, assigning the various modes and even using the 28-second looper couldn't be more simple, especially once you get used to it. Believe us: the simple fact that you won't lose a carefully tailored effect patch because you neglected to pressthe save button is an absolute godsend.

The simplest way of approaching the practical application of the M9 is to look at it as six conventional effects in a chain; for example, overdrive, chorus, vibrato, tremolo and so on. The only constraint is that you can only use three at any one time (on the M13 you can use four), although you can change which six you have in front of you whenever you want to.

We find that the best tones come from running your amp clean, which has obvious benefits when using the modulation and reverb palettes. The Octo reverb, for example, is instant Radiohead, and adding a touch of U-Vibe and Sweep Echo makes for a tone that's almost trance-like.

If you need dirtier tones, adjust your amp's gain alongside that of the drive effects to suit as you'd expect, but the Screamer, Tube Drive or Overdrive models sound just fine through a clean amp to us.

One casualty of the smaller front panel is the single LCD window, as it only displays the details of the most recent button accessed and effect recalled. You may get a bit lost until you get used to it.

There's a whole lot in the M9 and the way it goes about things is unique. It's not as fiddly as most multi-effects processors, nor is it designed to be used without an amp. Instead, it offers what a lot of real-world players want from a collection of stompers, but without the endless cost, hassle or the four-foot pedalboard, making it a snip at this price.

With an intuitive and save-free editing system, a colour-coded display and tank-like construction, the M9 is a solid, impressive unit. Best of all, it sounds great too.