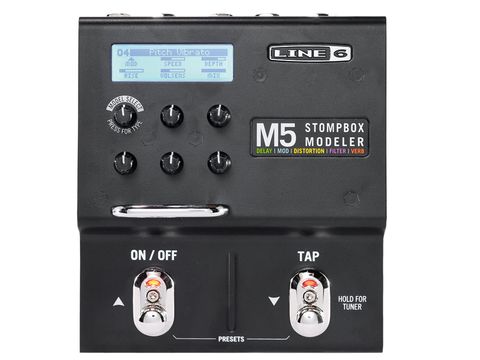 All the effects you'll need in a single stompbox, provided you use them one at a time.

Line 6 has been putting modelled effects into stompboxes for a few years now, ever since the DL-4, MM-4, DM-4 and FM-4 put a range of delay, modulation, distortion and filter effects underfoot.

The Stompbox Modeller series of pedals has eschewed the theme of one effects genre in one pedal for a more all-encompassing approach - the M9 and M13 offer over 100 effects types and allow up to three (M9) or four (M13) effects simultaneously - making them a practical choice if you are only going to have one effects box onstage.

The new M5, while still offering all of the same effects as its bigger brothers, takes a different approach, in that it only allows one effect to be active at a time and has a smaller footprint - the idea being that it can be easily added to a perhaps already crowded pedalboard to provide a multi-function role.

In essence the M5 can be whatever pedal you haven't already got. The M5 effects are arranged in five categories (delay, modulation, distortion, filter and reverb) and include 19 delays, 23 modulations and 17 distortions, plus 12 compressors and EQs, 26 filters and 12 reverbs, any of which can be easily loaded into one of 24 onboard presets for easy recall.

Everything is clearly shown in the display, with each effects category backlit in a different colour. The presets that come with the unit have been programmed at the factory but are easily overwritten: a model select knob scrolls through the effects models in each category, while a press on that knob moves on to the next category.

Holding the knob down stores an edited effect to a program memory, but you can also set the M5 up to automatically save any tweaks. Each effect has up to five adjustable parameters controlled by the five remaining knobs, each of which relates to one parameter, represented by a corresponding horizontal bar in the display.

Two footswitches control operations, the first being a standard on/off switch while the second is a tap tempo switch that can also be held down to call up the onboard tuner.

The footswitches are also used to call up presets - holding down both puts the unit in preset mode, calling up the preset screen where you can scroll through using the footswitches or the model select knob.

Holding the two down together again makes the selected preset active and puts the pedal back in its normal performance mode. Alternatively, you can go into the M5's setup menu to initiate instant preset, whereby presets load without having to hold both footswitches down for a second time.

Operation can be in mono or stereo, MIDI control is possible and you can add an expression pedal for real-time parameter changes.

At a similar size to an original Big Muff, you wouldn't call the robust M5 a compact pedal, but it won't dwarf the rest of the pedals on your board and runs from a supplied 9V DC 500mA adaptor, which is fairly small.

Alternatively you may be able to run it from a power distribution unit - it worked just fine with our Voodoo Lab Pedal Power 2.

Operation is pretty straightforward. Calling up each program or effect is dead easy and any tweaking can be instantly carried out with the soft knobs on the fly.

Each effect has its own unique set of parameters and a visual display that shows the black shading advance across the horizontal white bar as you turn the knob up is more intuitive than watching numerical values increase - you do, though, also see the numerical values for such crucial parameters as delay time and reverb pre-delay.

Like the M9 and M13, the M5 features a massive variety of effects. Most are models of either modern or vintage stompboxes (or studio gear), but there are also some of Line 6's own creations in there. The emulations of old classics effectively capture the essential flavour of the originals while the more universal items, such as parametric EQ, offer an added utility.

What you get with the M5 is the sense of having a full toolbox - just about any guitar effect you could possibly want is available underfoot, from the most basic overdrive to the esoteric in the shape of a Talk Box or guitar synth.

Adding an expression pedal immediately increases versatility, not just by giving you access to the usual treadle-operated effects - volume, wah (seven different models) and Whammy-style pitch shifts - but also in controlling any or all of the parameters for any given effect and creating some really interesting transformations.

If you program adjacent presets in the order you need them, it's very easy to switch between them during a song by using the M5 in preset mode with instant preset active - one footswitch hit will load the next preset. Doing it that way, though, means you'll always have an effect switched on.

If you want to be able to switch between presets and bypass the effects at different times in the same song, you'll need to get up to speed on your tap dancing - an M9 might be the better option in these circumstances.

We see the M5 more likely being used as a universal tool to provide a different single effect per song.

As an example, consider the guitarist playing authentic-sounding covers in a function band who perhaps already has a basic set-up of an overdrive, delay and wah but might need, in the course of a night, fuzz, flanger, chorus, phaser, tremolo, rotary speaker, harmony and envelope filter sounds, all at separate times (and rarely together in the same song) - the M5 could cover the lot.

We all have our favourite handpicked pedals on our pedalboard but there are limits, both physical and financial, to the number of pedals we can easily incorporate.

While there may be a core number of pedals that will be put to sustained use while playing, perhaps an overdrive to kick the sound up a gear or a particular distortion for solos, there will also be some that are used less often, maybe just for one number during a set.

If you're playing gigs that require several of those one-offs, you'll need a lot of pedals and a big board… or you can just add an M5 to your core collection.