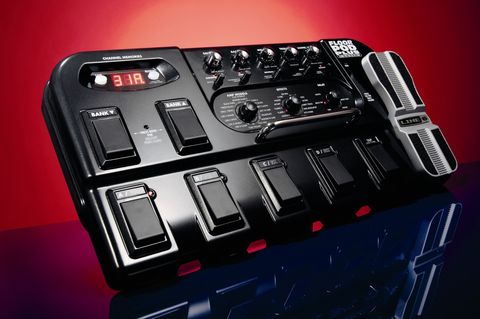 This pimped-up version of the Floor POD fills an important gap in the Line 6 range, providing a product with more sonic versatility than the standard Floor POD, but without the complexity of the PODxt Live. It's also a welcome addition to the wider world of floor FX units. Most players only really seem to want a handful of good-quality amp sounds and a modest range of the most popular effects, and Line 6 has collected the essential tools in a compact and user-friendly product.

It was ideal for players who needed a POD-based set-up on stage but who were reluctant to explore the depth and complexity of the PODxt Live.

The gulf between the two products was still quite wide, though, and the new Floor POD Plus looks like filling that gap nicely. The emphasis is still on clarity and ease of use, but the increased array of sounds and features brings the Plus into direct competition with a wider range of full-size multi-effects units.

While the original Floor POD looked a bit like a standard POD with an expression pedal added, the Plus version moves away from the familiar 'kidney bean' design and looks like a typical fioor effects unit.

The more conventional dimensions mean that there's now space for five, rather than three, footswitches along with the expression pedal and a larger selection of easy access knobs and switches.

In another move towards standard multi-FX design, the Floor POD Plus can be used in two ways. In channel memory mode, you use the footswitches to select from the 124 available presets (120 of these are initially filled with factory sounds, but you can overwrite any of them).

The first four of the main group of five footswitches are used for selecting the presets in each bank, and there's another pair of footswitches just behind, for scrolling up and down through the 31 banks. By pressing both bank switches simultaneously, you can switch to or from on/off mode.

Here, the first four footswitches function as a row of traditional stompboxes, controlling amp model, solo boost, FX and delay. The effects used in each of these 'virtual stompboxes' can be adjusted with the same flexibility as if the modules were chained together in channel memory mode.

Finally, the fifth footswitch is used for tapping in delay times, and by holding it down for two seconds you can access the built-in tuner.

Just like every other member of the POD family, the Floor POD Plus is very clearly laid out. As usual with Line 6 products, it's unlikely you'll need to refer to the manual.

The beauty of so many of the company's products is that you can set up and start using the full range of functions in minutes.

Immediately above the four main footswitches are three rotary switches, used to select the amp model, effect and delay type.

There are 32 amp models, and they'll be familiar to anyone who has used the 2.0 version of the standard POD.

By pressing down and then turning this switch, you can also select a different cabinet model from the default setting for each amp. There are 16 effect models, covering the range of standard stompbox types found on the original POD along with some more unusual sounds.

Whichever effect you select, you'll be able to modify a selected parameter by means of the effect tweak knob. There are also knobs for adjusting the level of the rudimentary compression and noise gate effects.

The reverb and delay are independent of the main group of effects, and each has a small level control above the main three selector switches.

The reverb type is governed by the amp model, so as a general rule if the real amp would have had spring reverb, that's what you get, otherwise it'll be a room reverb.

There are six types of delay effect, selected by means of the third rotary switch: tape, multi-tap, digital, reverse, sweep echo and analog.

Finally, the top row of knobs covers standard amp-type controls: drive, bass, mid, treble and channel volume. There's another control for the main output volume on the back panel, where you'll also find left/right outputs (use L only for mono operation), MIDI connections, a headphone output, aux input and an amp/direct switch.

There's no harm in hearing the original POD 2.0 amp models again - they were always a great set of sounds, with something for just about everyone. The original POD was a little short on effects, so the extra effects in the Floor POD Plus really make a difference.

The 'tron up' effect, for example - based on the Mu-Tron III envelope follower - adds some welcome seventies-style squelch to several patches. Similarly, the 'comet trails' filter effect (borrowed from the FM4 Filter Modeller) and the ring modulator allow you to create quite extreme sounds that were never possible on the standard POD.

In use, the only obvious weakness is the lack of an alphanumeric patch display. When you're scrolling through 124 presets, it's useful to have memorable patch names such as 'squelchy Bootsy' or 'Lifeson chorus'.

The patches on the Floor POD Plus are identified solely by their number, so it's easy to lose track of what you like while browsing.

The expression pedal is easy to calibrate to personal taste and has a generous amount of movement too. It defaults as a volume pedal, but can be instantly switched to wah duties by clicking the footswitch concealed under the toe end.

This isn't as sophisticated as the assignable pedals found on many rivals, but it's a well-designed solution for players who only need wah and volume.